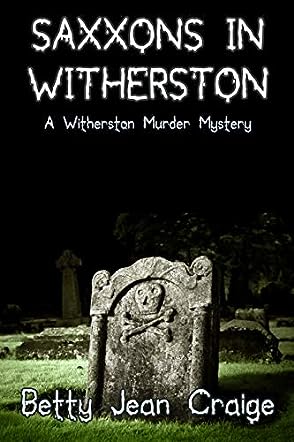 In retirement I began spending time in the beautiful mountains of north Georgia, where the thousand year-old Cherokee civilization, the Georgia Gold Rush and Land Lottery of the 1820s, the moonshine business of the 1920s, and the rise of the Ku Klux Klan all left their mark on the present. I wanted to introduce this part of our country to readers elsewhere, so I invented a town called Witherston, north of Dahlonega, and began writing mysteries situated there.

In my Witherston Murder Mystery series I wrote Downstream, about the pharmaceutical pollution of our natural environment, and then Fairfield's Auction, Dam Witherston, and Saxxons in Witherston.

Saxxons in Witherston: A Witherston Murder Mystery by Betty Jean Craige is the fourth entry in a murder mystery series that combines crime and the intricate nature of detective work to create great entertainment for readers. With settings at different times, the novel follows two crimes that are connected. A Ku Klux Klan murder in Witherston, Georgia, will have repercussions that are felt in the city fifty years later. Crockett Wood, a member of the radical white supremacist group called the Saxxons for American, is shot through the heart in his dinghy outhouse. Detective Mev Arroyo and her teenage twins, Jorge and Jamie, are pulled into an investigation that explores bigotry, racism, betrayal, and deceit. Was the murder of a black man and the rape and disappearance of his pregnant fiancée linked to the murder of Crockett Wood and how involved was Crockett Wood?

It is one thing to imagine a sophisticated plot and another thing to be able to write it to the satisfaction of readers. Betty Jean Craige has achieved both. In this mystery, readers are pulled into an investigation that is intense, following quirky characters through emotionally engaging scenes. It is fast-paced and told in a voice that is arresting. From the very beginning, the author intrigues readers with a crime scene—the murder of Crockett—and introduces the lead detective, Mev. I enjoyed the dialogues right from the beginning and the protagonist’s flair for interrogation. Saxxons in Witherston: A Witherston Murder Mystery catches the attention of the reader and sustains it through each page. It is well-crafted and the plot so ingeniously developed that each chapter compels the reader to turn to the next.