My Search for Air 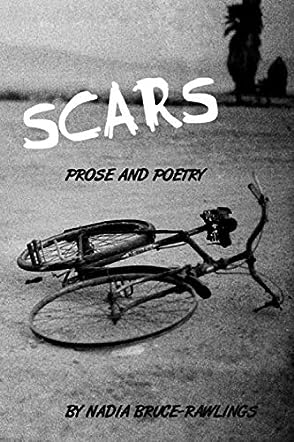 Scars by Nadia Bruce-Rawlings is a biographical anthology of the author’s early life of abuse and addiction. It consists of 11 stories/vignettes, and two poems, all of it dominated by her early molestation by her father that took her from what should have been an idyllic childhood to a desperate life on LA’s streets. She writes of hatred so powerful that she metaphorically sets her newly released ex-inmate dad on fire. She adds her family quarrels in Egypt, her mother’s degradation, a diner owner and drug dealer on Pico Boulevard, and most amazingly the physical scars on her own body. She describes a decadent, elderly gay Renaissance man who wants to marry her, her newborn daughter’s resemblance to her dying mother, an old coyote in the desert, and she recalls her days on the streets of stealing, crack, jail, violence, and rehab. She writes of the “sunshine of recovery” and of exchanging old memories for new. Ms. Bruce-Rawlings prose is gritty, real, honest, and brave. She goes where the proverbial angels fear to tread.

Scars by Nadia Bruce-Rawlings is a deeply moving reading experience. After I read it in one sitting because I couldn’t put it down, I shed some tears, took a walk in the spring sunshine, and finally wished I was close enough to her to give her a hug, first for her suffering and then for her emergence as a survivor of horrendous pain. She says she is happy because it all led her to her present life. I’m sure this book has captured her anguish and struggle so that she can place it outside herself and on the shelf. But her acquired wisdom and strength are here for us all to learn from and to provide us lucky ones, who’ve had life relatively easy, with empathy for those who never had a chance. Her writing will motivate her readers to lend a hand where they can. In the end, beauty can transform misery to art and to freedom, and with all the grim reality in Scars, it’s the exquisiteness of Ms. Bruce-Rawlings’ prose and her strength to convert an ugly truth into the transcendent majesty of the human spirit. God speed, Ms. Bruce-Rawlings, and many thanks for your courage to share.