Yes, Tin Lizzie Was An Alcoholic They Called Him Marvin 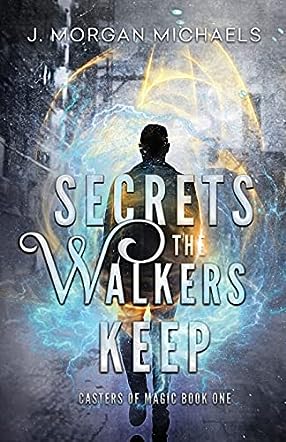 Secrets The Walkers Keep by J. Morgan Michaels finds the central character, Manhattan Walker, in the depths of despair after the death of his beloved mother. Through several harrowing chapters we follow his attempts to come to terms with her passing and get back to some semblance of normal life. Manhattan is fortunate to have an understanding employer who allows him time to recover, but all is thrown into confusion when he receives an odd bequest from his mother’s estate - a necklace which changes its shape and form as he handles it, creating turmoil in both his mind and his life. Searching for answers, he consults a trusted aunt from his huge family and slowly begins to realise that the family is not at all that it seems; it has been involved in magic for generations.

Struggling to come to terms with this strange, new-found knowledge, he allows Liv, an attractive co-worker, one he considers perfect and out of his league, to take him to a club where he meets some folk known as Casters - folk steeped in magic. He quickly realises they are like him in many ways, and they enable him to understand his gift and the risks that go along with it. He is made to understand that there are dark forces at work, hungry for the power the Casters hold; forces that will stop at nothing, including murder, to acquire it. He and Liv develop a close relationship, but Manhattan is confused when he is not able to relate to this beautiful girl in a sexual way. He is even more confused when he finds himself attracted to the owner of his local gym, and thus begins to question his sexuality. But these are the least of his problems. As dark forces gather, he learns that the death of his mother was not a simple heart attack and fate has decided that he must battle for the safety of the whole Walker family, the world, and his own life against a faceless and terrifying opponent.

Secrets the Walkers Keep is a multi-layered urban fantasy by J. Morgan Michaels, where magic and mystery are woven into an intricate, surprising, and sometimes shocking plot. Secrets the Walkers Keep is written in the first person and as such we share a great deal of what is going on in the central character’s head. Manhattan Walker is not an immediately likeable character - he is weak, feckless, and tends to shy away from emotional or confrontational situations. But as the narrative develops, we start to see Manhattan’s (Hat for short) strengths develop. It is almost a coming-of-age tale with some magic, skulduggery and horrific situations thrown in. The characters are well-developed and the narrative moves along at a reasonable pace. Secrets the Walkers Keep is an impressive debut novel which I enjoyed. J. Morgan Michaels is a talented author and I was pleased to see that his narrative allows for a follow up volume – it will be interesting to see what young Manhattan will get up to next.

Secrets The Walkers Keep by J. Morgan Michaels is a novel about Manhattan Walker, a man whose world is shaken when he discovers that everything he believed to be natural is a lie. While suspecting his entire life that his family were unlike others (in more of a rambunctious manner than what actually unfolds), it is only when he's forced to confront just how different they really are that his life shifts from late drunken nights to meetings with an accursed spirit. The Walker family is more than just offbeat...they have a legacy to uphold, a destiny so beyond his control that Manhattan barely has a moment to grasp its implications before he's swept up into a dangerously magical world - one where the Casters are in control - and where the race against time is as urgent and crushing as the need for secrecy.

Secrets The Walkers Keep by J. Morgan Michaels is intelligently written and is a surprisingly funny novel. Our protagonist Manhattan (referred to as "Hat" by those who know him best) is so likeable that we're pulled really quickly into a story - initially, at least - about the ultimate Average Joe. His observations about the life that surrounds him are what we all see but nobody wants to say, which makes him a wholly developed, fleshed out character, just like the others who come after. The storytelling is fresh and layered, narrated in the first person, drawing a reader in with the perfect balance of suspense and humor. I'd recommend this book to those who enjoy a story where a funny, everyday Everyman takes on the world that the rest of us can't see.

The Walker family is an odd bunch. They are a large, crude, loyal group of merrymakers who share almost every part of their lives with one another. Manhattan loves this about his family, even when he just wishes they would go away for a while. On the heels of a tragedy that ripples through all the Walkers, Manhattan stumbles upon a truth that has been kept secret for generations. Grappling with the implications of having such a large part of himself denied, and already prone to running from his problems, Manhattan is soon swept up in the heady rush of newfound magic. For a time he can forget his pain and loss, but when his visions of the past fixate on a murderer specifically stalking Casters, Manhattan is drawn into the dark side of magic where one wrong step could send him to his grave. Secrets the Walkers Keep is often surprising, and deeply honest. J. Morgan Michaels tackles some pretty intense trigger elements in a realistic and respectful manner that is highly commendable.

Secrets the Walkers Keep has what I consider somewhat unusual formatting in that it is a bit distracting at first, but which quickly makes sense when Manhattan has his first vision of the past. J. Morgan Michaels’ depiction of the Walker family’s gift resurfacing for Manhattan was utterly gripping. The description of Manhattan being drawn into a vision for the first time in his life was exquisitely disorienting and not only highlights just how out of his depth Manhattan is, but facilitates his falling in with a Caster party crowd. While Secrets the Walkers Keep definitely has that gritty, hard-boiled detective novel feel, Michaels does not shy away from taking a real look at emotions. I don’t think I’ve ever read a more authentic, true-to-life depiction of the aftermath of a loved one, and Michaels’ handling of Manhattan’s sexuality - and the realization that it may not be what he has always assumed it to be - really made Secrets the Walkers Keep a standout novel to me.