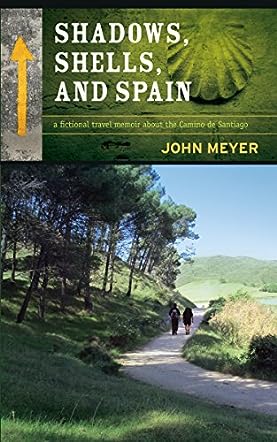 JOHN MEYER writes fictional travel memoirs—unique adventure stories that combine fun facts of history with present-day drama and humor—always revolving around a fictitious love story and always based on his own thrilling journeys. His previous publication, "Bullets, Butterflies, and Italy," was selected as a November Best Book by Chatelaine magazine. Meyer is also the studio writer for "Entertainment Tonight Canada" and has been ever since the popular daily show launched back in 2005.

Shadows, Shells, and Spain is a literary fiction novel written by John Meyer. While others basked in the sun and warmth of Palma, Jamie was indifferent to the charms of Mallorca. He had been searching for his wife for ten months now, with no word from her or her insufferable mother to help him understand why she had left, where she was, and when she would come home again. Pam had often spoken longingly of vacations on tropical islands, and Mallorca had been a recurring theme, so when her mother hinted that Spain may have been her destination, Jamie dropped everything and traveled to Mallorca. He was sharing an apartment with another ex-pat, tutoring Spanish speakers in English to make ends meet, and pounding the streets each day looking for the clues that would lead him to his wife. Then, suddenly, a breakthrough. He stopped by The English Book Shop to see if the proprietor, English Rob, had any new clients to refer to him, when Rob handed him a package. It had actually been sitting in the dusty book shop for some months now, forgotten until that morning. In it was a letter from his mother-in-law and, nestled inside the package, a smaller envelope containing a letter from Pam.

Shadows, Shells, and Spain stood out from the nonfictional travel memoirs I’ve read about the Camino by virtue of it being a novel, rather than nonfiction. As I sat down to read it, I wondered how it would differ from those remarkable memoirs I’ve read in the past. I’ve long been fascinated by the Camino, the Appalachian Mountain Trail and the Pacific Coast Trails, and by the fortunate souls who find a way to extricate themselves from the clutches of modern life and responsibility, and set off to find themselves on the trail. Meyer’s Jamie was an exception to the rule in that his reason for being on the Camino was external, was in effect forced upon him by Pam, and my affection and admiration for this lost soul was immediately and immeasurably enhanced as he took on the challenge of a month-long pilgrimage.

Anyone who has hiked the Camino, or been an armchair traveler and hiked perched upon others’ shoulders, will delight in Shadows, Shells, and Spain. There’s still the camaraderie, the spirit of the Camino which shimmers on every page of this compelling tale, but there’s more. Meyer’s own experiences on the Camino and his love of history combine to make this one of the more authentic Camino reads yet. I loved reading about the history of the Camino and each of the little towns Jamie walks through, and found myself sitting with a map of the Camino on my laptop, tracing his journey as I learned more about Spanish history than I thought possible. Jamie’s search for his wife, who’s always, tantalizingly, one step ahead is stunning in its simplicity and single-minded focus, and his Camino may indeed prove to be everything Pam had hoped it would be for him. Pilgrimages have been the source of fascination, magic and mystery since The Canterbury Tales ignited readers’ imaginations, and this tale continues that spellbinding tradition. Shadows, Shells, and Spain is most highly recommended.

John Meyer’s Shadows, Shells, and Spain is one man’s attempt to try to understand his wife by walking in her shoes. Jamie Draper is a dissatisfied Canadian high school history teacher. After years of marriage, his wife, Pam, abruptly packs her bags and then disappears. Jamie embarks on a life-altering adventure to find his estranged wife. He quits his job and ends up in Spain, where he receives a mysterious envelope containing a letter from Pam. Jamie is instructed to walk the Camino Path, a pilgrimage through Spain. Pam walks the Camino before him, leaving a trail of hidden letters explaining why she left. Jamie becomes a true pilgrim, as he journeys a long distance to discover a sacred place held within him. Every step is challenging, each letter a revelation; walking the Camino Path changes his life forever.

John Meyer pens a story within a story in Shadows, Shells, and Spain. Two parallel plots intersecting into a singular end. Two individuals held together by a covenant promise. Together, yet separate, one man, one woman, a husband and a wife travel down the same path. It is an adventure, a search for truth, a trail of enlightenment that leads to self-discovery. Meyer’s writing style is fluid and inviting. Describing villages, regional scenery and famous landmarks, Meyer’s knowledge of the setting allows him to guide the reader through the story. The Camino has a character of its own; the sacred trek shapes the characters of those who endure it. As the diverse cast of characters walk, their personal histories meld with the history surrounding them. As a result, it changes the course of their future. Shadows, Shells, and Spain reminds us to let go of past mistakes. “You have to let go of those shadows” and move on.

Shadows, Shells, and Spain by John Meyer is a fiction novel based on the themes of life, exploration, and travel. Shadows, Shells, and Spain is the story of Jamie Draper and his experience of life and love. When Jamie finds one day that his wife has left him suddenly with no forwarding address, so to speak, he is confused. Knowing there is still love between them prompts him to search for answers from her, and thus we find him on the famous Camino trail on his quest. The book then presents his journey on this trail and his experiences with the various people he meets, including Brie, a fun, interesting companion who has also gone through some similar experiences. Together they bond as Jamie continues to look for answers.

Shadows, Shells, and Spain by John Meyer is an entertaining read. I liked the central character of Jamie and found him to be relatable. His search for answers and how and why he reaches his final destination in the novel also provide food for thought. The descriptions of the Camino trail and area made me feel that I was reading a travel memoir at times. But the crux of the story is still Jamie and his relationship with his wife, as well as with his newly found travel companion, Brie. The writing is casual and engaging and a book like this might encourage people to travel and explore themselves and the world more at every chance they get, because one never knows what’s around the corner.