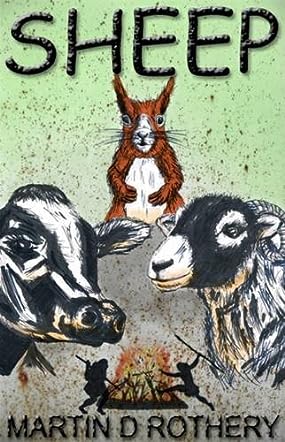 Martin Rothery (AKA Damon Rathe) started creative writing in September 2008 after enrolling on a creative writing course at the local college wanting to develop his writing style and ideas and has never looked back since.
By June 2009 he had joined the Holmfirth Writers' Group and March 2010 he became the treasurer.
After having had a few poems published, an article in a cat magazine and self published his first charity book Nonagenarians in remembrance of his grandparents and their writing, everything had been leading up to the first defining moment - the release of COWS!, his first novel.
Since then, in 2012 he's started his own independent publishing company, Fishcake Publications (www.fishcakepublications.com), released and co-authored another book of short stories, Souls of Darkness, under the pen name of Damon Rathe, published the prequel to Cows! titled Sheep and has just released his first full novel under the guise of Damon Rathe called Human Rights: Undead Set on Living.
Preferring to write children's stories and horror/fantasy/sci-fi he likes to release the former under his own name and the latter under his writing pseudonym. Damon Rathe is the dark side of Martin Rothery that sometimes wishes to be let out.
Martin is also an illustrator and cover designer and has done the covers for COWS!, Sheep, County Tales, Murgatroyd's Christmas Club, Human Rights and A Fistful of Marigolds as well as some of the internal images for Souls of Darkness. This allows him to do all the work in house at Fishcake Publications.
He often does workshops for children in the local community (if this of interest, please get in touch) and Huddersfield Libraries and has recently been involved with the Pageturners Festival in Huddersfield and will be involved in some way at the Holmfirth Arts Festival in 2014. He also loves going on residential writing weekends like the ones run by the National Association of Writers Groups and can usually be found at the Wentworth Castle, Barnsley retreat every year.
In the future, as well as continuing to write, Martin is excited to be working with a host of debut novelists as an editor and bringing new authors into the spotlight as a publisher very soon.

Sheep is the precursor to Cows! Both books are by Martin D. Rothery. I read them out of order, but I can truly say I don’t think that it diminished my enjoyment of either. The point is not the plot so much as it is the writing, the skilled and masterful use of words. Not since Animal Farm by the legendary George Orwell have I read such an entertaining and astute use of animals in literature. Martin D. Rothery has created a book that is both funny and philosophical. Sheep takes us back in time, way back in time to the beginning of a great disagreement between two intelligent species over a third intelligent species. Sheep is hilarious, but this disagreement will also make you think.

I cannot overemphasize the sheer mastery of satirical wit that Martin D. Rothery displays in this novel. I started laughing on the first page and I laughed at every page up to the very end. There is brilliance, warmth, and an obvious mastery of words and observational skills displayed on every page. But most of all it’s just funny and that’s what any work is supposed to do; entertain. If I tell you too much about it, I will spoil the wonderful page by page discovery that reading Martin D. Rothery entails. Maybe I have told you too much already, but I had to give you something to pique your curiosity. Sheep is well worth every penny you lay out for it. If you haven’t read Cows! then buy both. You won’t regret it.