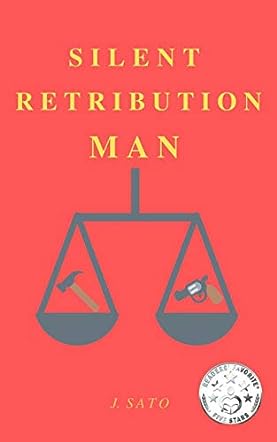 Silent Retribution Man by J. Sato is an interesting, somewhat disturbing thriller that follows Lionel Seaver, who, after having had his share of bad guys and tired of seeing greedy people get away with acts of injustice, decides to be society's whip. The protagonist is someone who has experienced losses: family, job, reputation. And all because of the jerks who do bad stuff to people and get away with it. Now, he recreates himself and finds a purpose to guide his life. He makes them pay for their acts of inhumanity against others. He stalks and beats them up. And this is something he does until he begins to wonder if his humanity is still there. Can a man who is quickly losing his conscience become the conscience of society?

The writing is awesome and it reflects the consciousness of the major character. Curiously, I found myself liking the protagonist, imagining the moments I have wanted to take the law into my hands and beat the hell out of some idiot. Most people will identify with Seaver as they remember that one person who taunted them with being mean just because no one could do anything about it. As the narrative opens, Seaver corners a jerk and gives him a good beating and I loved him being mean. This novel brilliantly examines factors that drive characters to insanity. In a subtle way, the author shows readers how serial killers and psychopaths are created. Silent Retribution Man put me on the edge of my seat and kept me turning the pages. It is awesome how a fantasy quickly becomes an addiction and turns an individual into a character that hardly knows where to draw the line. Tantalizing reading, indeed!

Silent Retribution Man is a work of fiction focused on themes of modern social behaviors and the current cultural climate and was penned by author J. Sato. Living out a kind of fantasy of a man with nothing to lose, in this story, we meet our central protagonist Lionel Seaver when his sense of justice is awakened by the rudeness and foolishness he sees around him in today’s society. As he witnesses everyday atrocities and watches bullying, powerful people abuse that power in order to rise ever higher, Lionel decides to take it into his own hands to deliver their comeuppance. Preying on those whom he deems fit, Lionel begins his personal journey of confrontation about his own primal nature.

Written for adults due to the graphic nature of the violence and language, this modern and intriguing psychological examination of vigilantism confronts some of the darker urges of the human psyche. As many of us often see small injustices and wish we could shake some sense into the people around us, Lionel Seaver becomes the dark mirror we can hold up to ourselves. His deeds are well narrated and make for an exciting story, but what gives this concise novel its true character is the deeply emotional journey that Lionel undergoes and the questions about justice and sanity that his actions lead him towards. Overall, Silent Retribution Man is a work of accomplished fiction with a socio-cultural eye, and author J. Sato has achieved great things with his intelligent and thought-provoking writing style.

Silent Retribution Man by J. Sato introduces us to the character of Lionel Seaver. Life has dealt Lionel a tough hand; he has lost his wife and child and he discovered his chosen career was not exactly what he had signed up for. As a lawyer, he realized the scales of justice were inexorably tipped in favor of the rich, the powerful, the famous and it was less about what you did but more about who you knew when it came to dispensing justice. Almost as bad as the criminals getting off with light sentences or, worse, “scot-free” were the a-holes who were just obnoxious people and seemed to make it their mission to taunt and torment the weak, the powerless, and the defenseless; bullies and rude people were almost as offensive to Lionel as the out and out crooks. Considering he had little left to lose in his life, Lionel made it his mission to deliver his own form of silent retribution wherever he saw injustice, rudeness, or suffering victims. It was a mission that could only end up in one place, eventually, but Lionel was determined to bring as many of these miscreants to justice before he might indeed need to face his own.

The premise of Silent Retribution Man was clever and had real potential. I felt author J. Sato did an excellent job of exploring and discussing the ramifications of this “vigilante” style justice being meted out by the character. The “pop culture” movie and television references, also added to the narrative in some instances and, although I did enjoy them, one needs to ensure they are clearly delineated from the narrative. The appropriateness of the references to the narrative at each point was what made them so successful and the author did a great job of managing those. This is a thoughtful read with plenty of moral issues for a reader to consider and I love a book that asks me to question society's as well as my own morals and come to a conclusion. I thought the author did an exceptional job of building the character of Lionel and, without any spoilers, his final dilemma was well executed. This is a book that makes you think, makes you question and there are too few of those around, so I do recommend this.

Silent Retribution Man by J. Sato is the story of a modern-day vigilante who has enough of the injustice in society so he decides to do something about it rather than waiting for the law to act. Lionel Seaver has had it with the arrogant men and women who wear the mask of civility and destroy the lives of innocent bystanders. He just cannot stand the fact that these people go unchecked and unnoticed because being a jerk is not really a crime in society. So he does what he thinks is best: he decides to deliver justice however he sees fit. He maintains his secrecy and chooses to be violent about the justice he serves. Being violent with those who don’t treat others right, who destroy people’s lives and their souls, gives him a sick sense of satisfaction that he cannot explain. But as things escalate, he has to ask himself if what he is doing is good for his own soul and mental health.

Silent Retribution Man is definitely a unique novel that gives you an adrenaline rush but at the same time gives you a lot to think about. The turn that society is taking is creating rage in all of us that is just brewing under the surface and most of us don’t know what to do with it. Lionel Seaver is all of us, but the only difference is that he did something about the rage inside him. His character development was monumental for the story and the overall pace of the story was incredible. The author has a very intricate style of writing, one that takes you into the minds of the characters to make you feel like you are part of the story. This is a great novel, one that I enjoyed because of how real it felt.

In Silent Retribution Man by J. Sato, a former lawyer goes after society’s bullies. For Lionel Seaver, it is time that victims got some justice. After losing his wife, he has nothing else to live for except the anger that drives him. Seaver contacts a popular news journalist, who in fact is another selfish jerk, intending to tell his story. Seaver begins with one instance that took place in a restaurant, apparently a place that jerks frequent. In this case, the conversations at one table - consisting of formally dressed men and women - catch Seaver’s attention. The most obnoxious of the five wastes no time complaining about spots on his fork. However, it is his blowing of smoke in the waiter’s face and his insults that earn him Seaver’s ruthless revenge. But, along the way, Seaver has to face some hard questions.

Written in the first person, Silent Retribution Man captures the main character’s personality and perspective adeptly. It describes the world through Seaver’s eyes. When he enters Clint’s office, Seaver is keen to note the news talk host’s condescending attitude. The observations in the book are immensely entertaining, especially since they are enhanced by quotes from movies. The incidents described are gripping, and the action is thrilling since the revenge to be inflicted on the perpetrators is unpredictable. In one, Seaver fills every space in a spiteful woman’s house with dead shrimp and fish. Additionally, when Seaver replies to Clint’s questions, which are asked with a touch of sarcasm, the answers give a broader view of Seaver’s motives. Silent Retribution Man is entertaining and compelling. It contains vivid scenes that caution against bullying.