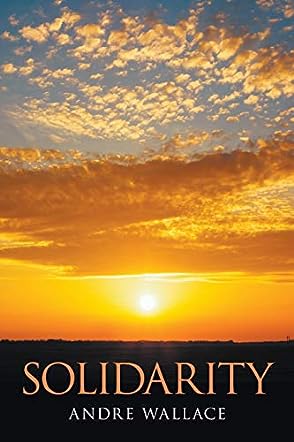 Solidarity by Andre Wallace is a dramatic work of fiction about friendship and love that touches the heart, mind, and soul. The plot centers on five friends, beginning in 1967, when conflict, change, and fighting for rights are the norm. The setting is a rural town in Indiana, where the friends are leaving high school and wanting to strike out on their own as adults. It's "ready or not, here we come" time, and the diversity among the group is what makes this story so compelling. Although they've been close since childhood, are they ready to take on the world? Lee is drafted into the Army and doesn't want to leave Julie, his romantic interest. He is black and she is white, so their interracial relationship is a secret to their parents and most others. As the Vietnam War rages on, Lee's friends back home are attending college and finding work, seemingly unaffected by the war, until protests grow. A crime boss is also in the picture, but the thread that runs through all of these changes and events is their friendship. We learn about each one of the friends as individuals, and the dynamics of their bond as well. The question is, can their friendship survive the conflicts--the times in which they live?

Wallace is a talented writer who has a clear path for this character-driven, emotion-fueled drama. It opens with an older Lee telling their story to his teenage son Noah. As the events of the tumultuous Sixties unfold, the author deftly shows us the impact that it has on his characters, and on society itself. Stress creates pearls from oysters, but it can make or break friendships. Lee is an intriguing character, and I like the realistic way Wallace portrays the interracial couple. Yes, they're willing to weather the storm, but in their own time and in their own way. A lot is at stake. Wallace's use of the Vietnam War helps add a heavier dimension to an already compelling plot. He uses the right balance between fact and fiction. But besides the intense drama, you have the theme of hope too, and that's important in a story like this. I like the reflection he gives the characters, the portrayal of culture, and the overall work is enlightening as well as entertaining. Fans of works like The Big Chill, St. Elmo's Fire, or Forrest Gump will appreciate Solidarity by Andre Wallace.