Daniel and the Serpent's Abyss And the Fires We Talked About Journey to the Hopewell Star 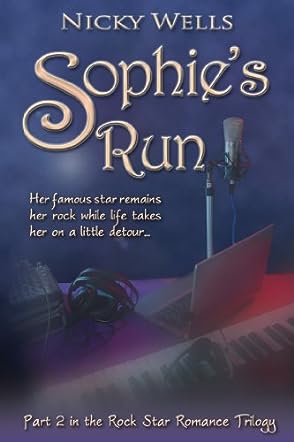 Nicky Wells is your ultimate rock chick author. Signed to US Publisher, Sapphire Star Publishing, Nicky writes Romance That Rocks Your World, featuring the rock star and the girl next door.

Born in Germany, Nicky moved to the United Kingdom in 1993 and currently lives in Lincoln. In a previous professional life, Nicky worked as a researcher and project manager for an international Human Resources research firm based in London and Washington, D.C. Like her first leading lady, Sophie, Nicky loves listening to rock music, dancing, and eating lobsters. When she’s not writing, she’s a wife, mother, occasional knitter, and regular contributor to The Midweek Drive show on Lincoln’s Siren 107.3 FM. Rock on!

Sophie’s back and this time she has found her ‘thunder and lightning bolt man’ also known as the man of her dreams. Sophie knows that this is the man she wants to marry yet, as the prologue hinted at some type of betrayal, all we can do is sit back and hope that her dream man Steve isn’t part of the betrayal. After that betrayal, the story opens with Sophie on a ferry headed to the German North Sea to hide from her problems. Nicky Wells has stepped up her game in Sophie’s Run, adding a mysterious Steve to the mix. Dan is back, in a more platonic role, but I can’t quite shake the feeling that he’s just biding his time for the right moment to pounce.

Even though this story is about Sophie, Nicky Wells fills every page with delightful characters with lots of color. Not one dull moment exists in Sophie’s Run as we follow her singing in a choir and running off to a small town and starting a new life there. There’s Dan who seems to have matured and mellowed out this time around, but he is still as cheeky as ever! The excitement of this story cannot be underestimated since it is filled with everything that makes up a good romance: love, sex, misunderstandings, a fire, and a meddling ex-fiancé. With dear old Steve added to the mix and no real clue about who Sophie will choose, I just want to dial her up and tell her to make a choice already!