Seven Parents, Daughter to None A Religion of Story 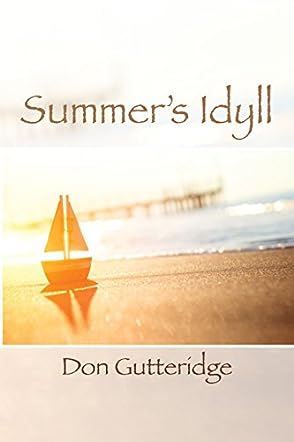 Summer's Idyll is a coming of age novel written by Don Gutteridge. Summer stretched out endlessly before him and his friends; it was only the first week, but Junior still remembered the last day of classes. He could feel the classroom seem to diminish somehow as the students left and Miss Kernohan began erasing the last of her writing on the chalkboard. Junior felt an emptiness, a sense of something lost. He was eleven years old and, next year, he would be in the sixth grade. Miss Kernohan would be little more than a wave and smile as he rushed past her classroom on his way to his own classes. But he still had something to treasure, a memento of sorts, her elegant writing in scarlet gracing the bottom of his own scrawled penmanship on an assignment: “Junior, you are a born storyteller!” He read it over and over again.

It was 1944, both an exhilarating and a troubling time to be young, free of school and alive. Junior’s dad had been away for what seemed like years because of the war, and things between his mom and his dad’s parents, with whom they were living, were getting increasingly tense. Sometimes, Junior felt a special kinship with his mom, a solidarity with her against the accusations, the critical looks at her wanting to go to a bar at night, to have some enjoyment while she was still young. She had long lost patience with the rift between her husband and herself; she wanted him there or to be free. Junior and his mom were like orbiting stars in their firmament; they shared the same house but were frequently not there together. Things were different then. Kids were out at dawn’s rising and gone till the sun began to set. Joey and Junior spent most of the mornings diving into the cold clear waters of the lake and all the kids were busily getting ready to put on this year’s circus, which would be the biggest, best one yet, its marquee announcing: Wiz Gallagher and His Fabulous Three-Ring Circus: One Performance Only. And there were mysteries afoot. Strange, out-sized footprints had been found on the sandy shore of the lake and word of a mysterious stranger being sighted kept the villagers on edge. One woman fell off her porch in shock at what she had seen, but thankfully was not injured. This summer would be special indeed.

Don Gutteridge’s coming of age story, Summer’s Idyll, smoothly and easily transported me back to a time that was both simpler and more complex. I’m old enough to remember my own summers of being up at dawn and going off with the kids in the neighborhood on adventures. I would have to agree with Miss Kernohan’s assessment of her favorite student, Junior, and declare that the author “is a born storyteller.” I’ve had the privilege of reading and reviewing a number of Gutteridge’s collections of poetry, and knew from them that he is a marvelous storyteller indeed, but Summer’s Idyll blew me away. The Oxford Dictionary describes an idyll as an “extremely happy, peaceful, or picturesque period or situation, typically an idealized or unsustainable one,” and I would think this description fits Summer’s Idyll quite well. There is the ever-present feeling of change, a tension that signals impermanence, a transitory quality to the light, the moods of the kids at play, even nature participates with a storm to end all storms and leaves a ghastly aftermath. Summer’s Idyll did of course eventually end, as all summers do, and realizing the passage of time as the pages flew by had me actively participating in the transitory nature of the work. This is a remarkable and outstanding coming of age tale; one that carried me blissfully along for the ride, enjoying every chilly swim, scary adventure and hard-won mock battle in the dunes. Summer’s Idyll is most highly recommended.