The Bellhop Only Stalks Once 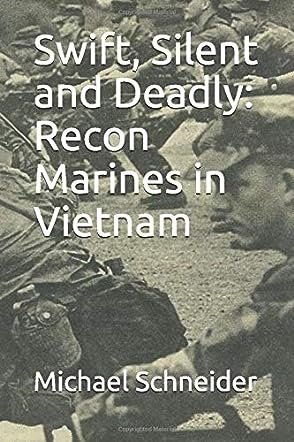 Author was born and raised in Omaha, Nebraska. He received B.S. degree in Civil Engineering from the University of Nebraska at Omaha in May 1976. He worked for the Federal Government as an engineer from June 1976 until January 2008.

I am an Army veteran. I was infantry, so I know a little about combat patrols in dangerous places. I served after the Vietnam War and, to be honest, I have always wondered what it would have been like to serve there. Except for my many conversations with men who actually served there, Swift, Silent, and Deadly: Recon Marine Heroes in Vietnam by Michael J. Schneider is the clearest picture of the heroes of that war I have come across so far. This is a great book. Don’t let the politics of that era dissuade you from reading it. If you want to learn more about the American fighting man at his very best, then let Michael J. Schneider tell you about him. He writes with knowledge, admiration, and respect.

The writing style of Swift, Silent, and Deadly: Recon Marine Heroes in Vietnam is not literary or flowery. It is utilitarian. It is a working man’s style. It is a soldier’s style. The style fits the stories. Any other style and it might not ring as true. I liked a lot of things about this book. The pictures are awesome and there are a lot of them. For me they brought back memories. The glossary in the back did the same. Some of the terms are specific to Vietnam, but a lot of them were still in use in the Desert Storm era. But the best part of this book is the individual stories of the men. They are great men, they are soldiers, and they are great Americans. Some great stories here.