The Adventures of Polo the Bear 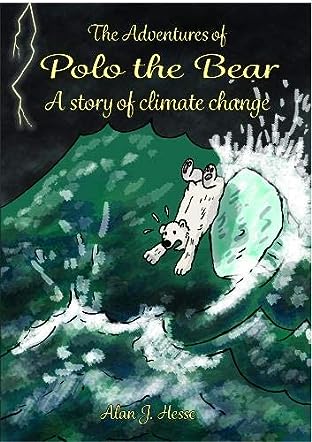 Alan J. Hesse is a conservation biologist and author of educational comic books. Alan believes that everyone should learn as much as possible about the natural world, and that this learning should be fun, engaging and action oriented.
Deeply concerned about the overall degradation of our planet, Alan created Polo the Bear and his comic book story to help spread awareness and knowledge about the complex, frightening and often confusing subject of climate change. He aims to make Polo the Bear into a global messenger for climate change education, climate action and hope for a better future.

The Adventures of Polo the Bear: A Story of Climate Change by Alan J. Hesse is a charming and humorous tale about a bear that embarks on a journey around the world and discovers important lessons about climate change. Polo has a serious problem. His home is melting and hunting is becoming difficult. During a hunting trip, the melting ice sweeps him away into stormy waters where he meets fishermen and sets out on an unforgettable adventure, taking him to places in North America, China, Columbia, and many others. He meets extraordinary people that teach him about climate change and the impact it has on their lives. Every adventure Polo discovers and each new location features a different problem rampant today with topics covered including hurricanes, deforestation, and pollution. Hesse includes an epilogue that contains further reading on the basic science behind climate change.

The characters are a charming blend of animals that talk and ordinary people dealing with real-life problems. The story centers on a polar bear that travels around the globe during a time of crisis at his home and meeting others that share his adventures which end up making him a celebrity. He meets a variety of people such as fishermen, villagers, and sledders. He makes a name for himself by reaching out to people and helping them along the way such as pulling them out of frozen waters, listening to their stories of devastation, and being a voice for everyone he meets. All the welcoming people that he encounters allow for Alan J. Hesse to explore various cultures and ways of life around the world, from Champion Island to China to India to North America. The use of education entertainment is brilliantly done, blending adventures and humor with endearing characters and the various ways of life around the world impacted by changes in the climate. Among these adventures, Polo finds himself learning about tar sands oil production, various hurricanes, deforestation, landslides, plastic in the oceans, over-fishing, air pollution, the peace treaty in Colombia between one of the main guerilla groups and farmers, unpredictable weather and lack of rain, and flooding.

Hesse delves into the effects on wildlife by educating young readers about melting ice caps harming polar bears and their hunting, with frogs and bears among the animals losing their homes to deforestation, a species of mockingbirds on Champion Island affected by a disease carried by flies, various ocean species from the oceanic sunfish to a rather toothy shark in danger thanks to water pollution, and the disappearing bamboo impacting the diet of panda bears. The humor is delightful with various scenes of Polo sailing across the oceans in a boat, taking a trip to the supermarket to shop, having a chance encounter with a Yeti that demands Polo make a change in the world, and meeting a little tiger cub that steals his hat. The artwork is lovely and arranged as a comic with panels containing colorful images depicting places around the world and even maps that detail exactly where in the world Polo is. Hesse has created an astonishing adventure that provides an educational source for all things climate change and is written in a way that reaches any age, both child and adult.

Fantastic way of tying together the wide-ranging issues of climate change, for ages 9+

I have read a lot of graphic novels in my life but I never thought I would come across one about climate change. Early on, we are introduced to our lead protagonist who comes across a huge problem with his habitat. Following a chance encounter, the bear’s amazing travels begin. We find him in all corners of the globe, meeting people of all cultures. The journey is a fantastic way of tying together the wide- ranging issues that are causingthe steady warming of our planet and the subsequent catastrophic problems. The book does not shy away from issues that are affecting the Earth, but presents them in a palatable manner.
One child in my year 5 (ages 9–10) class told me how informative they found it. I echo these sentiments: the complicated subject of climate change is clearly covered and well explained without becoming too burdensome. Footnotes throughout help to explain the more complicated issues and the epilogue gives more information on some of the basic science behind global warming and climate change.
This book would be accessible for year 5 and upwards and is cross-curricular: it could be used in a science topic about how the world is changing or perhaps as an alternative narrative-text type to focus on in literacy. The choice of the iconic polar bear as the main character is a strong one to which children will be able to relate. My class really enjoyed the main character and told me that they felt sorry for him.
The book has the feel of an authentic graphic novel. Indeed, a child told me that he loved the way the illustrations were done and that the colours used brought the story to life. It certainly is eye-catching and the way the comic strip has been designed means that it is easy to access and allows the story to move quickly without scrimping on any detail.
More useful information can be found on the accompanying blog: https://climatebear.com