Zoey RN, and the ER Apocalypse The Haunting of Bridge Manor Some Kind of Comfort 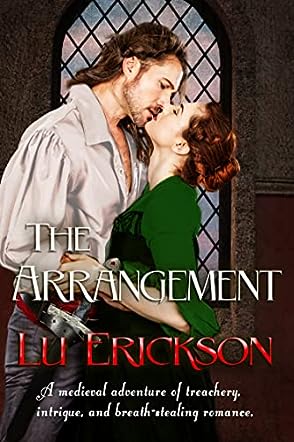 I love stories. Suspense, mystery, romance, drama, comedy--I love them all. Film or book, give me a good yarn over reality any day. My only requirement is that the characters catch my interest and don't let go.

In writing my own stories, it's human nature that intrigues me more than anything. What makes a person do what they do? Say what they say? Why do they try so hard to do the right thing, but sometimes, even with the best intentions, fail terribly?

Friendships also figure prominently in my stories because my own friendships have meant so much to me over the years. Whether light-hearted or gritty, in the end it's the relationships between people that make a tale worth telling.

I also write under the name of L. L. Erickson. I live in Sacramento, California, with my husband Pete and our rascally pup, Lilly.

It is 12th-century England and the country is ruled by King Henry but always with the support of the barons and lords. Sometimes, though, these powerful men and the odd woman can seek too much power and challenge the Crown. In The Arrangement by Lu Erickson, we meet the courageous widow Lady Adele de Guildfry. After a loveless marriage to the brutal Lord de Guildfry, she is finally released from her living hell by the death of her husband. Determined to run Guildfry on her own, she is determined never to remarry and suffer the brutality and callousness of another man. Her family’s lust for power, however, will see her forced into a corner she will struggle to escape from. Her mother and brother have determined they will make a suitable match for the widow, a match that will increase their own power within the kingdom and allow them control of the Guildfry lands. Adele’s best friend Gwendolyn has somehow navigated the murky waters of matrimony and found a true love match for herself. Despite this, Adele is determined not to endure her family’s plans to marry her off. Kevin Blakeslee is a second son and Gwendolyn’s brother-in-law. As a second son with no inheritance, Kevin has made his name as a brave and respected knight but when he is ordered by the king to woo Adele and so protect the Guildfry lands for the Crown, he is equally determined not to surrender his freedom and marry the widow. Set amongst the tumultuous times of a rebel uprising, this unlikely love affair will play out.

The Arrangement is the perfect blend of the derring-do of the knightly era and the nobility with the sweet, passionate exploration of love and happiness. Author Lu Erickson has beautifully combined the elements that make medieval times so fascinating for readers with mystery, double-dealing, swordplay, and true romance. The characters are realistic, easy to identify with, and root for. Overdrawn, as they should be in a historical romance of this type, it is generally easy to sort the good from the evil and to cheer their successes and lament their failures. The author has truly captured the essence of the warfare of this period, as well as the mythical tales that develop around great deeds (and some not so great deeds) that are amplified and embellished at each telling as the truth is more shrouded in each recitation, through oral tradition and song.

The descriptive style makes it easy to feel the very dampness and coldness of the stone castle walls and to empathize with the stark difference between those born into position and wealth against those born to be serfs or servants. The accident of birth played such a great part in the destiny of all these characters and the author draws this out marvelously. I particularly enjoyed the idea of women having much more power than is generally conceded as being theirs in the Middle Ages. This is an incredibly easy and enjoyable read for lovers of all genres, not just historical fiction. There truly is something for everyone in a simple tale of good vs. evil, honor vs. dishonor, and love vs. hate. I thoroughly enjoyed this book and can highly recommend it.

The Arrangement by Lu Erickson follows Adelle de Guildfry, a widow who is finally freed from her horrid marriage. After years of enduring her sad excuse of a husband, Adelle has found freedom at last after the untimely death of Hubert. Seeking to rebuild the Guildfry estate to its former glory, Adelle wants nothing to do with another man; however, her brother Ranulf has other plans. Meanwhile, as suitors prepare to woo the new widow, there is one man who has no interest in the wedding, not for all the land or gold in the world. But upon receiving orders from the king, his life may not go as planned either.

The Arrangement by Lu Erickson is a thrilling and enticing story filled with love, hate, and deceit. The start of the novel sets the tone with an ominous death that gives the reader insight into the long-standing backstory of the characters. We are quickly introduced to all the main characters of the novel and slowly the puzzle pieces fall into place as we follow the plot. I absolutely loved the pacing of this novel as well as the world-building; there was just enough information given to know the history of the various families and their agendas. I also loved that the main characters shared a wish for freedom outside of marriage; however, they learned that together they could find the happiness they never thought possible. This novel hit all the sweet spots and I would highly recommend it to any fan of historical romance.

Lu Erickson’s description details the predicament Adele faces. I agree with Adele that she prefers to live alone rather than be unhappily married. While de Guildfry’s treatment of Adele isn’t related in-depth, it seems that he treated her poorly. I cannot imagine living with someone I hated for 13 years. Adele’s distrust of men is understandable, and her family’s lack of concern for her is clear. I found Kevin amusing, as he was prone to putting his foot in his mouth when he spoke to Adele. His friends, Rowan and William, assist by causing friction between Adele and Kevin. Adele’s naivety is her downfall. However, the conversations and thoughts involved are relatable, making the story feel realistic. The transitions between several characters are seamless, and I became enchanted as I read more. The story is unpredictable, and the intentions of the supporting characters add to this element. Readers who enjoy slow-burn historical romances with realistic characters should read The Arrangement.