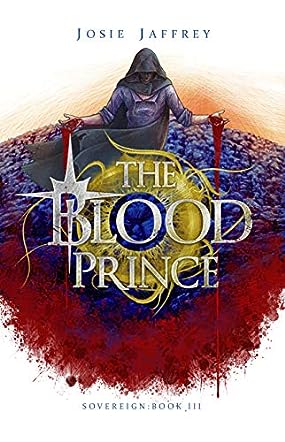 Josie lives in Oxford with her husband and two cats (Sparky and Gussie), who graciously permit human cohabitation in return for regular feeding and cuddles. The resulting cat fluff makes it difficult for Josie to wear black, which is largely why she gave up being a goth. Although the cats are definitely worth it, she still misses her old wardrobe.
​
When she's not writing, Josie runs a book blog, The Gin Book Club, which posts monthly video reviews to YouTube. Her YouTube channel also hosts videos about Josie's writing, including writing vlogs, book trailers and readings.

The Blood Prince by Josie Jaffrey is the exciting conclusion to the Sovereign series. After years of searching, Cam has finally found Emmy but she's not the same person anymore. He comes up with a risky plan to find the son she lost years ago by returning into the Red. Julia's officially back in the Blue, but everything has changed since her trip into the Red and Rufus won't leave her alone. Still seeking answers about her parents and determined to finally put an end to the Nobles' reign, Julia ventures out into the Red, willing to risk everything she has.

Josie Jaffrey keeps you on the edge of your seat with every chapter as Cameron, Julia, and their friends' journeys end. Answers abound around every corner as the reveal of Emmy's son changes things for everyone and plays a key part in how the story eventually unfolds. The root of Julia's journey has been her striving for power and this installment is no different as she continues the fight to find her power against the Nobles. Her journey has several darker moments which are gritty and psychologically intense, but she does find a light in the darkness and has some gentler moments throughout which help to balance. Romance and friendship play an important part in her development, specifically through her relationships with Lucas and Claudia, and these dynamics have a specific place in certain decisions she makes.

Cameron is on a similar path and can finally see an end to this long journey. His relationship with Felix is an important aspect of Cameron's path, exploring love, partnership, and trust. Jaffrey strikes a balance between dangers by exploring the darkness residing within the Blue - which is vibrantly shown through its true colors - and through the Red which is known for its dangers but then has hidden safe places to show its better underneath. Jaffrey ups the threats by increasing the danger that the Weepers, Silver, the Nobles, and the creepily terrifying Tacitum provide to everyone. The theme of humanity is at the root of the story as the Silver are confronted by the threat of humanity when contaminated blood begins to spread. Jaffrey also weaves the theme of humanity through the other characters such as Emmy's darker turn and through a few Silvers who embark on a new life as humans. The Blood Prince is a satisfying conclusion to the Sovereign series with Jaffrey weaving in themes of humanity, love, and power in an adventure filled with danger, romance, and vampires.