The Bridge in the Fog 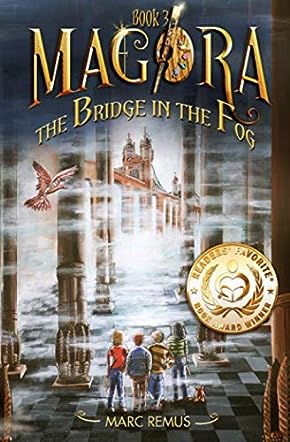 Marc Remus is an award-winning German Neo Pop-Art painter and illustrator with exhibitions world-wide. He was educated in the United States, graduated with a BA in art and illustration from Art Center College of Design in Pasadena, CA, and lived in Japan and Central America for some years. He has travelled to more than sixty countries and visited over a thousand cities, of which he has painted over two hundred. His work has been featured on TV and in many magazines and newspapers in Germany, USA, and Mexico.

During his studies in California, Remus took his first children’s book illustration class. His teacher inspired him to start writing and not just illustrating. The result was a picture book called Painting Brian, which led to the Magora series. Over a period of twenty years, Remus has developed this magical world based on places he has visited, people he has met, and things he has learned through his studies in acting, cultural Anthropology, and linguistics.

He continues to have painting exhibitions, studies Mandarin and Spanish, and enjoys travelling the world.

The Bridge in the Fog by Marc Remus is Book 3 in the Magora series, but works excellently as a stand alone. An amazing gate painting made by Holly's late grandfather, Nikolas, was in fact a portal to the magical world of Magora. When staring into Ms Findley's crystal ball, Holly bears witness to her death, but that is not all it has to reveal. It shows a haunting image of her grandfather imprisoned, something that should be impossible if he were indeed dead. There is a chance this apparition could be her grandfather's double, but one way or another she needs to know. If that alone wasn't enough, rumours have been circulating about Cuspidor having a daughter, and Holly has a sinking feeling she knows just who that daughter could be. Little did she know this quest would unleash something beyond even her imagination.

The chapters are a perfect length for the target audience, each written with a style and flair that kept me turning the pages. At first I was concerned about picking up the third book in a series, but Marc Remus does a brilliant job of filling in any necessary information to create a self contained story. This is a really well written book with a good balance of characters, development, and plot. It contains the correct mix of descriptive setting and dialogue to engage the reader and ensure they are quickly drawn into and invested in the plot. It is filled with imagination and creativity and the creatures within the book are charming and imaginative. I'd be hard pressed to find anyone who wouldn't be swept up in the magic and fantasy of this book, and the world created. I'm certainly considering heading back to book one to see how this adventure began.

In The Bridge in the Fog, the third installment of the Magora fantasy series by Marc Remus, 13-year-old Holly O’Flanigan sets off back to Cliffony Academy with a black omen: she sees her own death foretold by Brian’s mother’s fortuneteller crystal ball. Despite this, she decides to return to the magical world of the painting, as she realizes that everyone in Magora is a double of a real person in Donkleywood … which means her own Grandpa Nikolas’ double might still be alive. She also learns about the Woodspeople, where her grandpa used to live in Magora, and the existence of a Bridge in the Fog, which leads back to the land of the Ledesmas. If she finds this bridge, she thinks she’ll reunite with her grandfather. She also hears rumors about the existence of Cuspidor’s daughter – and as she has no recollection of her birth parents, Holly starts suspecting that she might be this long-lost daughter and the reason why Cuspidor is after her. These three very charged story lines weave and intertwine to build the plot of the third adventure.

In this book, Marc Remus takes the reader back to a land full of color, texture and wonder. As an artist, he’s deeply familiar with the process of creation and his prose bursts into life with a whirlwind of fantasy and visual richness. The book can stand alone, as the conflict is more than enough to carry the novel from beginning to end. But reading the rest of the series first would give the reader considerably more depth and detail to all these fantastical creatures and characters. While the book is full of funny moments and creatures (such as a talking tree house and a shape-shifting troll), I’d recommend this read for middle-grade readers and up as the descriptions of the showdowns are very intense.

The Bridge in the Fog by Marc Remus is the third book in the Magora series, a great mix of children's fantasy and sci-fi, with characters that young readers will root for. Meet Holly O’Flanigan, a thirteen-year old who is in her third year at Cliffony in the fantasy painting of Magora. She is taken on a mysterious mission to find the daughter of an evil man, the Duke of Cuspidor. Accompanied by her friends, Rufus, Brian, and Amanda, she does not know that the journey will involve more than what they bargained for, with a horrible experience of the creepy ward where the Unfinished are detained, the shadowy Woodspeople, and the stunning unveiling of secrets about Holly’s grandfather. Follow Holly and her friends as she seeks answers and she unwittingly unleashes something that could destroy their world.

This is a story that will fill the dreams of young readers, a tale of magic with twists that readers won’t see coming. The sense of mystery is wonderfully developed against the backdrop of a magical and imaginary setting, constructed with powerful elements and images that will excite the reader’s imagination. The characters are well-thought out and the development is great. The Bridge in the Fog is a gripping story with surprises that make it an interesting and hard-to-put-down read. The reader is immediately addicted to the characters and can’t resist following them to the end. I enjoyed the ending of the story which is well-crafted to leave readers longing for more answers. Marc Remus has created a series and a world where young readers can take flight — entertaining and absorbing.