Simon's Search for the Scary Dragon 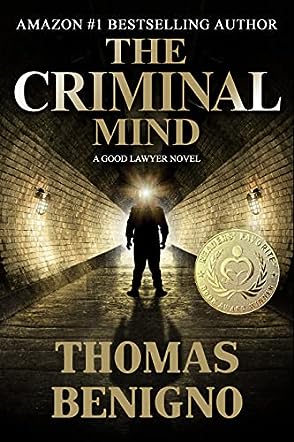 Thomas Benigno is a practicing attorney on Long Island, N. Y. After graduating Benjamin N. Cardozo School of Law in Manhattan in1979, at the behest of his Criminal Law Clinic Professor, Barry Scheck(who later obtained fame for representing O. J. Simpson) he wasfast-tracked to a position as Associate Attorney with the New York CityLegal Aid Society in the Bronx. While there he sought out and tackledthe grittiest of cases, even representing the infamous Spider-manRapist. He currently resides on Long Island where he is also engaged inthe private practice of law. THE CRIMINAL MIND is his third novel. ALSO AVAILABLE ON AMAZON: The Criminal Lawyer, #2 in The Good Lawyer series, based on real crimes that occurred on Long Island, and The Good Lawyer, the international bestseller inspired by a true story that started the series.Contact the author:Website: Benignobooks.com Instagram: ThomasBenignoauthor Twitter: @ThomasBenignoFacebook: Thomas Benigno Author

When local authorities are apathetic regarding a kidnapping and the recent discoveries of children's bodies, three retirees start an investigation of their own in the intriguing suspense novel, The Criminal Mind: A Psychological Thriller (The Good Lawyer Series: Book 3) by Thomas Benigno. When his sister Peggy vanished on her way to a dance, Charlie Malone left home and joined the Marines. More than fifty years later, Charlie meets eighteen-year-old Mia, who has ties to his hometown. Sadly, as a result of childhood trauma, Mia has multiple personalities. When the bodies of small boys uncovered at a construction site coincide with Mia's traumatic memories, Charlie believes there is a connection between the boys, Mia, and Peggy. Convincing retired lawyer Nick Mannino and Former Secret Service agent Paul Tarantino to investigate, the three men travel to the crime scenes. Shocked by local law enforcement's dispassionate attitude regarding the recent grisly discoveries and the current kidnapping of a local boy, they become suspicious. Is it possible the police are involved in a cover-up? If so, how long has it been going on?

Superbly written, The Criminal Mind by Thomas Benigno is a sensational novel in the Nick Mannino series. Filled with mystery and suspense, it is a riveting story with an intricate plot, complex storyline, and intriguing characters. Spellbinding twists coil throughout, coming to a horrifying and heart-stopping conclusion. Distinctive characters who have acute moral, physical, emotional, and mental issues add context to the storyline. Their contrasting personalities, challenges, and attitudes give the plot definition and balance. Although this is the third book in the series, the book does well as a standalone. Nick's previous exploits that are relevant to the plot ease into the storyline without interrupting the flow of the story. Engaging and intense, it is a gripping novel with a compelling and suspenseful plot that promises to thrill fans of mystery, thrillers, and suspense.