The Curse of the Skyfolk 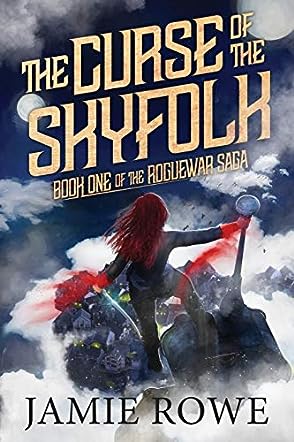 Jamie Rowe was born in October of 1989 in the English County of Cornwall. In 1994, he emigrated to the scorching shores of Australia along with his family. He developed a deep love for reading at a young age, which was carefully nurtured by his parents. His first sojourn into writing was at the age of eleven when he wrote the truly awful first chapter in a sequel to the Lord of the Rings (spoiler alert: Gollum came back to life as the Dark Lord. Yikes!)

He graduated from the University of Queensland in 2014 with an Archaeology Major and went on to become a Site Supervisor in the UK, unearthing archaeological material dating as far back as the Bronze Age. Jamie currently lives in Brisbane, Australia with his fiance, Tiana and his dogs, Marcy & Loki.

Since 2009, writing has completely enveloped every aspect of Jamie's non-professional life, penning four novels to date, he hopes to be writing until his fingers are ancient and arthritic. His debut novel, The Curse of the Skyfolk, was released in February 2018 and is the first installment of the Rogue War Saga.

The Landfolk had been long oppressed by the Skyfolk after the Race War, and Prince Zand Feralitor can no longer bear to see his people suffer and be subservient to the grey skin tormentors. He vows to free his people and end the Skyfolk reign, but finding allies proves difficult and complicated. Meanwhile, Atlis is a ruthless Assassin Hunter working for a Skylord, feared and hated by Landfolks and Skyfolks alike. However, an encounter with a Landfolk assassin reveals her true nature that will lead to her execution. She needs to tread carefully, especially when she has so much to learn about her ability.

The Curse of the Skyfolk (The Rogue War Saga, Book 1) by Jamie Rowe has a great premise and a fascinating world building that is well thought out in terms of races, culture, history, and conflicts. It has a strong, multifaceted plot with unpredictable twists that will keep the reader intrigued from start to finish. The fight scenes are great, vivid and thrilling. The characterization is solid; despite their flaws, both Zand and Atlis are admirable characters. The lengths they go to achieve what is deemed necessary for the sake of their obligations are at times crude but efficient. I find them parallel to each other in most ways. I also gravitated towards Astrika, the prodigious Seersha who impressively shows her worth as a warrior. Nighman, however, intrigued me the most. His role in the conflict is still ambiguous, and his antics, as well as his interactions with Rough-Rocks, the giant, provide some lighter moments for this dark and violent epic fantasy. Filled with greed, revenge, betrayal, and conspiracy, Rowe’s The Curse of the Skyfolk is a solid debut for the series.

The Curse of the Skyfolk is a work of epic fantasy fiction penned by author Jamie Rowe, and forms the first book in the Rogue War Saga. In a conflict between the subdued and defeated Landfolk and the ruthless, conquering Skyfolk, two important characters slowly wind their way toward destiny, and one another. Atlis is a young slave girl, promoted to Assassin Hunter because of her skills, but when she discovers that her true self may not be safe up in the sky, she seeks a way out. Meanwhile on land, Prince Zand is furious at seeing his people forced into slavery and poverty by the rulers overhead, and so he sets off on a mission to ally himself with warriors even more terrifying than those he wants to defeat.

The Curse of the Skyfolk is definitely an epic read for hardcore fantasy fans, those who wish to get lost in a whole new world for a good long while. I found the world building to be superbly crafted, but also heavy in its history and politics, into which I’m certain epic fantasy fans will enjoy delving deep. The characterization of Atlis was particularly enjoyable, a strong woman thrown into difficult circumstances, mixed with a classic tale of fate versus free will. Prince Zand’s plot line was also enjoyable for the many characters he meets along the way, and I found the Skyfolk themselves were intensely described as true, heartless villains, perhaps the masterpiece of the book itself. Overall, Jamie Rowe has created a perfectly tailored tale for the fantasy readership that is sure to please.

The Curse of the Skyfolk (The Rogue War Saga Book 1) by Jamie Rowe is the story of Prince Zand, who is in charge of the Landfolk. His title is somewhat defunct, but he is determined to save his people and ensure their freedom. The Skyfolk have defeated them. Among the Skyfolk is a girl called Atlis who has become an assassin. There is plenty to keep a reader entertained - betrayal, adventure and more. It kept me turning the pages. Atlis is a strong character and probably my favorite in the book. She is determined and knows how to do her job. Finding out that there is another side to herself really throws her. She knows her people will never accept her.

Jamie Rowe has written an interesting book in The Curse of the Skyfolk (The Rogue War Saga Book 1). The characters were well developed and the dialogue was good. The story has good descriptive scenes and I could really picture this world in my head. Rogues are interesting and what they can do is quite cool. Their powers make people afraid, which I think is a universal thing; people fear those that are different. I think this would appeal to epic fantasy fans mostly, but I think it would have a wider audience too as it is a good story. It is easy to follow too, unlike some epic fantasy books. Age range, because of the language and situations the characters find themselves in, make it best aimed at an adult audience. I would definitely recommend it.