The Day The World Ended 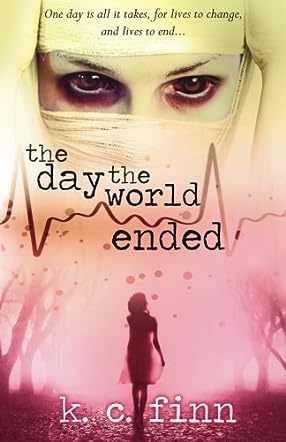 K. C. Finn was born and raised in Cardiff, South Wales, where her love for storytelling grew at a precociously young age. After developing the medical condition M.E. / C.F.S., Kim turned to writing to escape the pressures of disabled living, only to become hooked on the incredible world of publishing.

As an author for Clean Teen Publishing and Crushing Hearts and Black Butterfly Press, Kim spends most of her time locked in the writing cave with an obscenely large mug of tea. When not writing, she can be found studying for her MA in Linguistics, watching classic British comedy, or concocting evil schemes in the secret laboratory in her attic.

The Day the World Ended (Skin) Volume 1 by K.C. Finn was a day like no other. April 3rd. Cherie’s father heads to work like every other day. Her mother is still working at the hospital. Cherie heads to the mall with her friend Cariad, not knowing what they are about to step into. News bulletins are reporting sightings of Skins in the area, and a chance meeting with some of Cariad’s friend’s changes life as they all know it. The day the world ended chaos descended as the horror of the Skins unfolded. Cherie wants to help her injured friend, but her journey doesn’t go as planned as she faces horrors nobody should ever have to face, let alone a 13-year-old teenager. In The Day the World Ended, Cherie fights to survive against all the odds as she discovers the horrifying truth about what the Skins are, and has her world ripped apart.

The Day the World Ended (Skin) Volume 1 by K.C. Finn was a cracking start to a new series. The story starts in the present, then goes back to April 3rd, the day the world ended, and tracks Cherie’s fight to survive the end of the world. The story was gripping right from the word go, action all the way with no let up. I thought it was very well written, well thought out and something just a little bit unique, different from other horror stories. The characters were likeable and their personalities emerged throughout the story, especially that of Cherie, the main character. I liked the sneak preview of the next book at the end, and I now can’t wait for the next installment!