Mango (the long haired ginger cat) Learns She Is Adopted 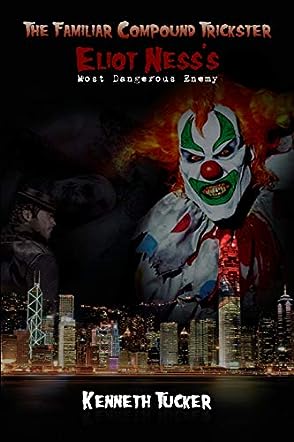 I am a retired professor of English, with a specialty in Shakespeare. After retiring from thirty-one years at Murray State University, I began writing books, both fiction and nonfiction. I have long been interested in Eliot Ness, since Louisville began receiving the series in 1961. My first book, nonfiction, Eliot Ness and the Untouchables (2000; rev. ed 2012) dealt with the historical reality and critiqued the television and movie versions. I first heard of Ness's involvement with the case of Cleveland's Mad Butcher of Kingsbury Run in 1961 when I read Oscar Frailey's highly fictionalized account of Eliot Ness's years in Cleveland, Still unsolved officially, the case involved the dismemberment of at least 13 victims in the during the mid-1930s. Since then, evidence has surfaced about the killer. And I decided to write a novel about Ness's involvement with the murderer with emphasis upon the effect of the case on Ness's character. Although other books and stage plays have dealt with the case, my version is the first to name the major suspect.
==

The Familiar Compound Trickster: Eliot Ness's Most Dangerous Enemy by Kenneth Tucker is more than your run-of-the-mill blend of murder and mystery, an intoxicating story with a powerful historical setting and very compelling characters. After his crackdown on Al Capone, Eliot Ness becomes the Director of Public Safety for Cleveland and his fight against crime scores great successes, until a serial killer comes into the game, one who might be his nightmare. Mutilated bodies with parts scattered in specific places become the talk of the city. Ness is under pressure to catch the killer before he strikes again. But when he starts suspecting Gaylord Sundheim, a physician and an alcoholic. for the murders, Ness faces another problem: there is a copycat. Can he gather enough evidence to nail the killer and the copycat?

Kenneth Tucker’s riveting story has strong historical references and a plot that transforms it into a page-turner. The story is well-imagined and crafted to keep the reader intrigued and emotionally involved. I enjoyed the red herrings, the biting suspense, and the gritty investigation. Readers can feel their pulse rising as the tension mounts with the increasing number of murders. The characters are well-developed and readers can easily sympathize with the protagonist. The Familiar Compound Trickster: Eliot Ness's Most Dangerous Enemy is one of those rare stories that combine a variety of genres — thriller, mystery, and murder — to offer entertainment to a wider audience. The writing leaps off the pages beautifully, highly descriptive and featuring plot-driven and character-enhancing dialogues. I found a lot of entertainment reading this gripping story.

The Familiar Compound Trickster: Eliot Ness’s Most Dangerous Enemy is a murder mystery and, more than that, a piece of the story of Eliot Ness. The book jumps around a lot from the past to the present through mostly Ness thinking back on his career and his family and wife. We join Eliot after he has put Al Capone in jail and moved on to his next situation. He is now in Cleveland, Ohio having been appointed the Director of Public Safety. He quickly becomes obsessed with the latest serial killer, “The Mad Butcher.” Ness and his team believe they have found the “Butcher,” but they have to tread carefully to prove he is the right one. Eliot's home life suffers greatly through this process and we feel the frustration of his wives; Edna, wife number one, Evaline, number two, and lastly Betty and their adopted son, Bobby. Ness puts work above all else and it was quite fascinating to follow the path of Ness and his team members, as well as the killer.

The Familiar Compound Trickster: Eliot Ness’s Most Dangerous Enemy is sometimes a little confusing to be sure exactly where in time Ness is, but the excitement, mystery, and real life events make this a 'hard to stop' reading book. Kenneth Tucker has taken the real life events and embellished them with believable dialog, action and nail biting excitement to make The Familiar Compound Trickster a sure-fire winner. If you like looking back at 1930s history, mystery, thrills and more, then this is a must-read.