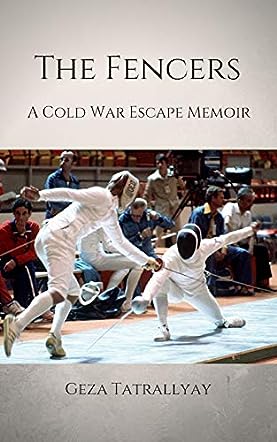 As a writer and reader of thrillers, memoirs are not usually my thing. And these days when I see an article about sport, my eyes glaze over. It is a long time since I played any kind of sport myself and, well, these days sportsmen and women aren’t what they used to be. So, I braced myself and entered the world of author Geza Tatrallyay through his memoir, The Fencers, the third volume in a trilogy of autobiographical Cold War escape stories. I’m sure glad I did. I hadn’t read either of the first two in the series so I was fascinated to learn of the author’s background, his own family’s escape from Communist Hungary, starting out from scratch in a new country, Canada, fitting into a society that was so different it must have seemed like being on another planet. We follow the author’s highs and lows as he sets out to become a fencer and eventually finds himself, to his own great surprise, representing Canada as an épée fencer in the 1976 Montreal Olympics. I am old enough to recall those Olympics and it was at a time when, so much younger, I was very interested in sport, including as a spectator.

The interesting thing about The Fencers is that the reader is treated to an insider’s view of exactly what was happening at the time, including a vivid birds-eye-view description of gymnast Nadia Comaneci’s amazing feats. Those games are treated in considerable detail, perhaps taking up most of the book, but against that background, the author describes his meeting and developing a relationship with Paul Szabó, a Romanian-Hungarian fencer who wanted to defect to the West. He was representing Romania at the games but he was willing to put everything on the line, including his life, to avoid returning to the corrupt, cruel regime of Nicolae Ceausescu. The author assisted him to do so and, in the process, became a life-long friend. Tragedy struck Szabó later but he managed to start a new life, as the author did, in his adopted country. The Fencers is a fascinating, hard-to-put-down read.