The Adventures Of Clive In the Magic Forest 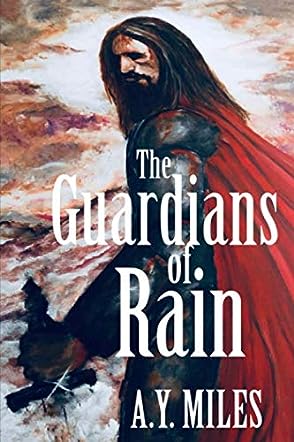 Gamain was one of the kingdom's greatest treasures. He foresaw wars, attacks, betrayals. He hadn't, however, predicted his own abduction, or being left to rot inside a cold, dank cell with only a spider for company. The king viewed him as a trusted ally. Determined to get him back, the king sends his second son, Prince Amador, to the rescue, but instead the young prince finds an unlikely ally, the leader of the Rogue Warriors, Michael. He had been sentenced to death, but Amador had seen in him the qualities of loyalty and bravery his own men lacked. Instead of death, he proposed that Michael rescue Gamain. And so begins the story of dreams, visions, and nightmares, where the line between prophecy and imagination is forever blurred, and fate watches with bated breath as destroyer and protector arise.

The Guardians of Rain is an epic fantasy brilliantly crafted by A.Y. Miles. It follows a selection of main characters from a nymph to a prince and those in between, and each character is bursting with their own personality, morals, and depth. There is so much to love about this book; it is an epic fantasy in every sense of the word. The tension is high and the stakes are constantly increasing. A.Y. Miles pays equal attention to character development and world building, giving the plot a fleshed out and realistic feel. Intrigue, danger, morals, honor, and threats fill every page, driving the reader forward in anticipation to discover what will happen next as those in power seek to abuse it and corrupt those whose ear they hold. A brilliant, page-turning read.

“One twin will have the power of pure evil and will destroy the kingdom as well as the world. The other will have the power of salvation. This twin will someday destroy the ominous one and save the world by finding love. And the enemy will die a coward's death.” Despite his service and loyalty to King Amador, Lord Michael is forced to choose the death of his wife to spare his young son’s life. As the heartbroken knight discards his identity and lives as a farmer, away from the eyes of the Langdon army, he protects his son and a special young girl named Rain, who will fulfill the prophecy and save the land from a tyrant.

The plot of The Guardians of Rain by A.Y. Miles may seem unclear at first, but the events gradually converge and the connection between the characters becomes distinct. It’s a story of twins with opposite natures and destinies. However, I also view it as a story of how the fates of two men change as time and circumstances reveal their true dispositions. The world-building has an intriguing history and is filled with dark secrets and betrayals. It has plenty of suspense, action, and gore. That said, it also has themes of familial bonds, romance, faith, and courage.

I gravitated towards several characters instantly－both protagonists and antagonists. Amador's and Michael’s fates are parallel to each other; a noble prince becomes an easily manipulated ruler, and an outlaw becomes a legendary knight and beloved protector. Villain high priest Miths is akin to the infamous Rasputin. Erik and Rain are easy to root for, while Wee provides some lighter moments in this dark tale. Overall, Miles’s The Guardians of Rain is an affecting read with a strong premise and characterization that adult fantasy fans will enjoy.

In The Guardians of Rain by A.Y. Miles, King Roland's powerful magician has been kidnapped by a rival king. It is left to his younger son Prince Amador to stage a rescue attempt and restore peace and stability back to the kingdom. Helping the prince in his quest is a brutal warrior named Michael. They decide to use the rival king's young son James as ransom but as they are ambushed, deathly consequences occur leading to a series of events shrouded in deceit, murder, lies, and revenge. Prince Amador soon becomes king and is tormented by his actions and broken promises. He finds himself in a loveless marriage and takes counsel from long-standing advisor Miths, a cunning and manipulative priest. As the next generation grows up, the secrets of the past come back to haunt Amador; he discovers an ultimate betrayal and now seeks unimaginable retribution.

The plot was a little slow in the beginning but it really picked up speed and interest when Michael was introduced into the story. The author has taken extreme care and consideration by creating such great and memorable characters, especially the vile and cunning Miths. I loved the way there was a clear and detailed description of their backstory as this gave a great insight into the characters' view of the world. There is some violence in the story but it was needed to add substance and believability. The twists and turns in the plot were superb and the revelations were shocking. There are many subplots within the story but they are equally strong and interesting. You will certainly be taken on an emotional rollercoaster with this novel. There is romance, battles, revenge and dark secrets revealed which travel across three generations. The ending is a definite tear-jerker and I sense there could be a sequel to this story and these amazing characters.

This is my friend, author A.Y. Miles new book. A.Y. , rather Andrew as I know him, is a great guy. But as a lover of stimulating stories, being a great writer is far more important to me. And he is a great writer.
To be blunt I am not a fan of anything "fantasy", so I had no real plan to read his book. (Clearly being a great friend is not that important to me either).
So when I read an online review of 'The Guardians of Rain' by some lady claiming that," this was the best book I have ever read! ", I rolled my eyes and chalked it up to a review by a relative or at the very least someone he was currently sleeping with. Disregarding her presumed bias, I moved on.

But then a pandemic showed up and I was suddenly forced into lockdown without anything interesting to read. I begrudgingly looked to my friend and his current repertoire: 'The Lay of LALA Land' - a book about some crazy girls he used to date and their shenanigans with a virgin; (ahem...it sounded a little too familiar) and 'The Guardians of Rain' - which I chose by default and for the hot warrior on the cover. Having finished reading what I thought was going to be the most, least appealing fantasy book ever imagined, this is my review: I am CRAZY in love with 'The Guardians of Rain'!

Now before you roll your eyes at this review you should know that I am neither related to A.Y. or sleeping with him. However, if he was anything like his fabulous character Lord Michael, I might be. The character Lord Michael is the John Wick of the forest; take that, Derek Kolstad. Although I am not the kind of girl who needs to be saved by a hero, I AM guilty of secretly wanting one to appear. And this warrior is relentless. Never have I been this invested in any characters, real or imagined, in my entire life. I found myself screaming at the protagonist, the antagonist, and even at the author as I ripped through this story.
This book made me nuts.
I also learned a few things as I read. I learned a new word: Onus. I learned it's apparently not appropriate to text the author while reading his book, questioning his character's choices, and demanding hints about what's coming next in later chapters. I learned you can't judge a book by it's genre.
"The Guardians of Rain" is a simple book with a complex story of love, violence, tenderness, ruthlessness, and magic. I felt like I was watching a film, so no doubt this book is headed that way. And I can't believe I am going to say this but I am a fan of fantasy now. Or at least A.Y's version of it. I didn't want this story to end. Sadly it did but fingers crossed for a sequel. Not a sequel of the pandemic of course, but a sequel to seriously one of the most entertaining books I have ever read and one of the best things to come out of this crazy year. Thanks A.Y.--
Victoria