How Much Big Is the Sky by Daniel B. Botkin by A. Claire Everward The Haircut Who Would Be King 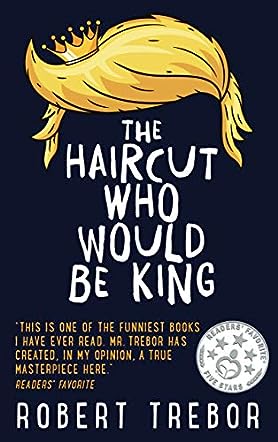 Robert Trebor is a character actor with more than 40 years experience on stage, film and television. Two of his noteworthy roles are The Son of Sam in the film Out Of The Darkness opposite Martin Sheen, and Salmoneus the merchant in the Hercules and Xena TV series. Playing a psychopath and a salesman was enormously helpful in preparing this book.

The Haircut Who Would Be King by Robert Trebor is a Political Fable. This is the story of Donald Rump’s rise from a precocious self-obsessed 9-year-old to President of the United States. Charting his story, we go through disastrous real estate deals and a series of reality shows on TV. Meanwhile, in Russia, we meet Vladimir Poutine, a homosexual raised by the KGB, with a strong interest in bodybuilding. After the Soviet Union fell, Poutine coped in a strange way. Back to Rump, just as he is entering the political arena, running for president against Mallory Claxton. Poutine wants the presidency of Russia, but how far will they both go to get what they want?

The Haircut Who Would Be King: A Political Fable by Robert Trebor is one of the funniest books I have ever read. The fact that it is based, not even loosely, on current political situations of today makes it eminently more readable and, believe me, this is not just another send-up. Mr. Trebor has got these characters scarily accurate and, although this is a farcical story, there are a few elements of truth and reflection in there. It has been a long time since I laughed like I did reading this book; the characters are amazing, so much so that when I see the real ones on TV now I shall probably struggle to keep a straight face. Skillfully woven, intertwining two stories into one, Mr. Trebor has created, in my opinion, a true masterpiece here. It’s funny, it's true, it's vaudeville at its best, and I recommend this for anyone who wants a truly good laugh – don’t read it in public though, unless you want people to think you have lost the plot!