Riding with Ghosts, Angels, and the Spirits of the Dead 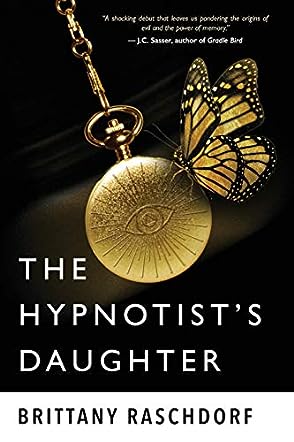 Brittany Raschdorf is a devoted mother of two who lives in Chesapeake, Virginia with her husband and their two dogs. Growing up, Brittany was always tethered to a book, only putting them down occasionally to play in the mud or roughhouse with her brother. She knew deep down she had a passion for words—it was the way the black jumped off the white and landed in her soul as she read. But it wasn’t until she began to write that she truly came alive. And it wasn’t until she became a mother that she realized she had a story to tell.

Young adult fiction isn’t my usual genre of choice, but the description of The Hypnotist's Daughter by Brittany Raschdorf was tantalizing. It hinted at something sinister: “In the movie industry, you don't get something for nothing”, and in light of the latest Hollywood scandal surrounding the Weinstein allegations, Brittany Raschdorf has just released a novel that will grab young adults’ attention quick smart. But that said, The Hypnotist's Daughter is about a whole lot more than the sexual abuse of Hollywood starlets. Beautiful 18-year-old Prosperity Baxter has a wealthy and well-connected father, and lives in luxury. What is missing in her life is her mother, who committed suicide when Prosperity was only three. Prosperity loves her dad, but alternates between love and hate for her once-popular actress mother, whom she never got to know. She too wants to be an actress and her dad can help her. He does, but Prosperity senses hesitation behind the encouragement. Why?

As Prosperity takes her place on the movie sets, she begins to learn what really goes on behind the scenes, but she can’t shake off the niggling feeling that there’s a lot more to her mother’s suicide and her father’s hesitation. She also senses something definitely out of place, even evil, about the powerful people now controlling her career. At the same time, she is inextricably drawn to and repelled by her handsome young manager, Hudson, who alternates between dark, angry moods and loving, gentle moments. Again, why? lt’s all very bewildering to Prosperity who doesn’t know whom to trust or believe, and odd flashbacks while shooting the horror film in which she’s starring are wreaking havoc with her mind.

All of this suspenseful Hollywood action is going to keep young adult readers turning the pages of The Hypnotist’s Daughter. There’s a bit of everything going on in Prosperity’s life: young people having fun, flirting with each other, and experimenting with drugs. And there’s some good people looking out for her welfare too. Just as well. Although older readers might find the very detailed narrative a little slow at times, young adult readers will relate to it all, and especially to the first person voice in which this story is told, memoir-style. Getting right inside Prosperity’s head and emotions is an ideal way for readers to identify with her alternating insecurity and brave face, those times when all teens feel like two people, the one the public sees and the one they don’t. The Hypnotist's Daughter by Brittany Raschdorf is a very good first novel. And for those who like this story and the author’s style, you’ll be pleased to know this is only the beginning of a Hollywood saga to be continued in the next book. Yes, Raschdorf leaves Prosperity, and readers, with lots of unanswered questions about what was happening with her parents before she came into their lives and what is happening with her now. Stay tuned for the next book…

A fresh new approach with a diverse characters You will find yourself holding your breath and turning pages until your eyes blur. I could not put this book down. Dying for the sequel!!!

This book is incredible! Every free moment I had was spent reading! I had no idea that you had this hidden talent Brittany! I cannot wait to read more! So proud of you and making your dreams come true!

A compelling read. Check it out!

This book captured my attention from the first page. I was compelled to keep reading and was left dangling at the end. I can’t wait for the sequel.

This book was great! I struggled with chapter 2 because it brought up stuff from my past. Im so glad I pressed trough. I couldn't put the book down, can't wait for the sequel :-}

Absolutely wonderful first novel by Brittany Raschdorf. Engaging from the beginning... I spent every spare moment I had reading The Hypnotist's Daughter. I'm looking forward to the sequel!

I read it in one sitting

Couldn't put it down! Great story line kept you right in the thick of the suspense all the way to the end. hoping for a continuation!

This book should a book read by every book club in America. It is fantastic. I want more. So many plot twists and turns. The author gives you everything you would want in a book and so much more. I couldn't put it down.