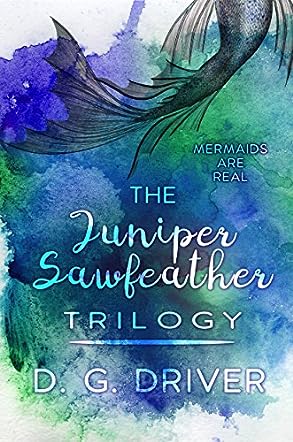 D. G. Driver is an optimist at heart. She loves to write books for tweens and teens with about kids striving to make a difference in the world. When she's not writing, she works as a teacher and performs in local theater productions. You can learn more about her and her books at www.dgdriver.com

The Juniper Sawfeather Trilogy by D.G. Driver consists of Cry of the Sea, Whisper of the Woods, and Echo of the Cliffs. In Cry of the Sea, an oil spill drives Juniper's activist parents into action, but her life changes drastically when they pull mermaids out of the ocean. When the media catches wind of the mermaids' presence, a bigger conspiracy is unveiled and Juniper is determined to fight against it. Whisper of the Woods finds Juniper suffering the backlash after what happened with the mermaids. Now everyone thinks she's a liar. Her parents have joined in protesting the logging of Old Growth trees by her uncle, who is determined to chop them down due to a long-held grudge. After a fight with her boyfriend, she wakes up in a tree, thirty feet off the ground, with no idea how she got there. In her fight to save the tree, she finds herself trapped over a hundred feet off the ground. In Echo of the Cliffs, Juniper's stunning adventures come to an end. Juniper is determined to find the mermaids again and fulfill a promise she made, but everything changes when her boyfriend goes missing. Everyone tells her to give up, but she knows he's still alive and is determined to prove it. Lives of those she loves are at stake as Juniper races to uncover the truth behind an ancient legend.

The trilogy focuses on Juniper's journey to find her voice in an amazing read. D.G. Driver delivers a brilliant trilogy with a brave and compassionate heroine who is also a little reckless and stubborn. She's not just an activist, but also an ordinary and realistic teenager. Juniper has an honest and genuine voice, shown through a layered personality that's easy to connect with. She respects her parents and their activism, but she's also feeling a little weighed down by their overwhelming plans for her and their example. Like any teenager, she has this little part of her that wishes they were different and wants to subtly rebel against them. Driver weaves in social commentary through real-life issues plaguing the environment, and puts a different issue as the focus of each adventure, including oil spills in the ocean, logging, and pollution. Mythology is at the heart of the story as magic comes to life through nature and history, bringing Juniper into the middle of it all. The media is shown in its various lights by going into both the positive and negative press, and giving famed attention to the sudden appearance of mermaids, but then changes to constant slander and harassment after everyone thinks she lied. Driver also incorporates the pettiness of high school and subtly digs into the need for popularity through Juniper's best friend. While Juniper doesn't care what people think of her, her best friend Haley does and this often sees them clashing, mainly throughout the first two books. Haley has a pleasant arc as she grows a lot by the end of the trilogy, which results in her and Juniper becoming much closer. She finds her own voice and stands up for herself.

The romance between Carter and Juniper plays a key part throughout the books, but at times it comes in second to the different causes they're fighting for, which often frustrates both of them. Their romance has a sweetness to it as it has that first love feeling that Juniper explores while also fighting to save mermaids, tree spirits, and mysterious killer whales. Her family dynamic is at times strained as she often fails to see eye to eye with her parents, but the love between them is real and heartwarming. She's often trying to find her independence from them, and how to separate her voice from theirs. The Juniper Sawfeather Trilogy has everything you could want: a brave heroine, stunning mythology, and a harrowing fight to save the environment.