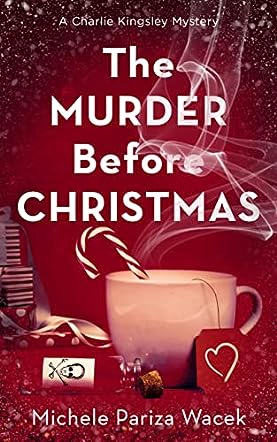 When Michele was 3 years old, she taught herself to read because she wanted to write stories so badly. It took some time (and some detours) but now she does spend much of her time writing stories. Mystery stories to be exact, ranging from psychological thrillers to cozies, with a dash of romance and supernatural thrown into the mix. If that wasn't enough, she also hosts a virtual book club you can check out and join (for free!) at MPWNovels.com

When someone poisons a man's Christmas gift, a local businesswoman searches for the killer in the delightful sleuth mystery, The Murder Before Christmas by Michele Pariza Wacek. Charlie creates her own tea blends and herbal tinctures and sells them from her home. At times, Charlie mixes infusions and teas for her clients' specific purposes or ailments. When Courtney, a beautiful young pregnant wife, asks her to make her a love potion, Charlie refuses her request. Distraught, Courtney makes a comment about killing her husband, but Charlie quickly passes it off as a weak joke produced by stress. Several weeks later, Courtney's husband dies, and the murder weapon is a bottle of poisoned brandy. Charlie immediately visits Courtney, wondering if she followed through with her idea of murdering her husband. After meeting with Courtney, Charlie believes the girl could be innocent. However, the police have an entirely different opinion about Courtney's guilt. At Courtney's request, Charlie starts looking into the murder. Is Courtney innocent? Or is there someone else who had a motive?

The Murder Before Christmas by Michele Pariza Wacek is a delicious murder mystery that is an absolute delight to read! Set in a small Wisconsin town, the book is an irresistible cozy mystery. The combination of a hometown feel, the pall of murder, the intrigue, and the relatable characters create a suspenseful and engaging storyline. Reminiscent of Agatha Christie's Miss Marple, Charlie's character is a charming nosy neighbor who is easy to like. It is a sensational story that will thrill everyone who loves an entertaining amateur sleuth novel starring a determined protagonist who always seems to find herself knee-deep in murder.

The Murder Before Christmas by Michele Pariza Wacek is a cozy mystery. It is part of the Charlie Kingsley Redemption series. Charlie Kingsley sells teas and tinctures in Redemption, Wisconsin. Courtney asks her about love potions, but Charlie does not sell those. Courtney then asks about poison, jokingly thinking of killing her husband. When Courtney’s husband ends up murdered, Charlie knew that Courtney would be the first suspect. Courtney’s mom hires Charlie (who solved a case before but is not a licensed investigator) to help clear her daughter’s name. Charlie ends up getting into a lot of twists and turns but finally arrives at the shocking answer.

I thought that The Murder Before Christmas by Michele Pariza Wacek was a fun read. I liked that it was a quick read and that it was hard to put down. I loved the world-building as it was easy to picture everything. I really liked that it is a part of a series, but you do not need to read them in order. This is the first one I read and I did not feel lost. I appreciated that. I think reading in order might help with the characters a bit more though. I think Charlie was my favorite. I loved how straightforward she was. I really loved all the twists in the story. Usually, I am good at figuring out who did it, but I was wrong this time, so kudos to Michele on that. If you love cozy mystery series and/or are in the mood for a Christmas novel, then I would definitely recommend this book.

How could a pregnant woman be in need of a love potion? And for her husband, no less? And then she turns around and wants poison instead, also for the husband. Charlie runs a specialty tea shop and she makes teas for special requirements, but she doesn’t do love potions. And, she definitely doesn’t make poison. Courtney, new to town, arrives at Charlie’s tea shop just before Christmas and makes this odd request. Courtney is six months pregnant and believes her husband is cheating on her. Charlie refuses to help in either request, offering sage advice to talk things over with her husband instead of taking action. When the news breaks on Boxing Day that Courtney’s husband is found dead in his home, murdered, and the only one present is Courtney, there are a lot of suspicious leads. But amateur sleuth Charlie is determined to get to the root of the mystery and find out if Courtney really is the murderer.

Michele Pariza Wacek’s Christmas mystery, The Murder Before Christmas, is an engaging read and a good mystery. The plot evolves as amateur sleuth and tea creator Charlie first meets Courtney, then, after the murder, she gets to know the woman better as she helps her solve the mystery. With all the unexpected twists and turns in the plot, the reader is left guessing as Charlie puts her skills to work to solve the murder. Charlie’s had considerable experience solving murders, as those fans of the Secrets of Redemption series will recall. And, like her previous sleuthing expeditions, there is lots of fun and humor mixed in with the mystery, and the resolution is not what the reader expects. The Murder Before Christmas makes for a great cozy mystery read.

The Murder Before Christmas by Michele Pariza Wacek takes you on a journey to find out who poisoned Dennis Fallon on Christmas Eve. Courtney, his widow, met Charlie Kingsley in her tea shop when she was discouraged about her marriage. At six months pregnant, she can't fathom why her husband would have an affair. Charlie is hired by Violet, Courtney's mother, to find the true killer. Charlie investigates Dennis's business associate, Glenn, then realizes something is shady in the financial business but is it enough to kill someone over? Glenn's wife, Tiffany, is Courtney's employer and a college friend of Dennis's. She is knowledgeable about the specific herb that was put into Dennis's brandy. Could she have a reasonable cause? Can Charlie dig deep through the lies, affairs, and business deception to find the true killer?

I found The Murder Before Christmas to be a fascinating story. Michele Pariza Wacek takes a character from her Secrets of Redemption series and begins a new series, the Charlie Kingsley Mysteries. The author plants layers of deception which Charlie must unfold to get to the motive and means of Dennis Fallon's murder. The scene runs smoothly from one interview to Charlie discussing her findings with her friend Pat or Officer Wyle. The characters are well-developed and lifelike. You feel compassion for the pregnant widow, Courtney, while questioning if her tears are real. Charlie appears to be a simple tea enthusiast, but the author plants questions about her past with killers that could be uncovered in other novels. Overall, I enjoyed the twists and deception that kept Charlie off the scent of the killer longer than usual. The story didn't end as expected, with several characters guilty of something, but only one of murder.

Charlie Kingsley’s business is making tea potions for her clients. When Courtney comes requesting a love potion, Charlie has to explain that she does not have a tea potion for love. Courtney is pregnant and scared that her husband is having an affair and she desperately wants to rekindle the romance. Unable to obtain a love potion, she mumbles maybe a death potion would also be good. Several days later Dennis is found poisoned and Courtney is the prime suspect. Violet, Courtney’s mother, approaches Charlie, asking for her help in finding the real killer. As Charlie feels somewhat responsible, she takes on the challenge and is determined to find the answers. Tiffany and Glenn, friends and business partners, are the most likely to be involved. Charlie finds a way to connect with both Tiffany and Glenn and question them about Dennis. Charlie does not stop even, when the police believe they have the right person, until all the clues are revealed and the surprise killer brought to justice.

The Murder Before Christmas is a mystery with many twists and turns. I really enjoyed reading The Murder Before Christmas a lot. There was a mystery, danger, friendships forming, family ties, suspense, and a bunch of unexpected findings. I found Charlie to be the kind of friend I would certainly want in my corner. The more facts she finds, the more times the killer’s identity changes. Michele Pariza Wacek is a talented author who has managed to combine fun, intrigue, and good writing all in one book. If you like mystery and suspense with a strong cast of characters, then this book is a must-read.