One Bucket At A Time 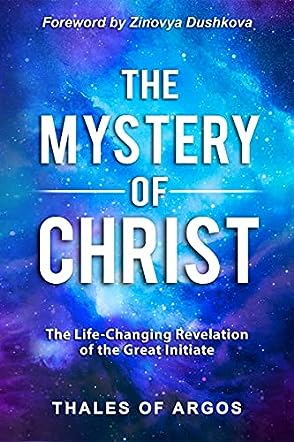 The Mystery of Christ: The Life-Changing Revelation of the Great Initiate (Sacred Wisdom Book 5) by Thales of Argos is not your everyday book – no, this is definitely something a bit different, something right out there and yet, as one reads it, the clarity of the narrative, the suspension of disbelief in the substance, and the calm acceptance that this may, in fact, have been the way it occurs, arise within the reader’s mind. Thales of Argos, a Greek or Hellenic, is an initiate; one who is inculcated into the ways of Truth and the realities of the Cosmos and Life in general. A pupil of the great Greek philosopher Heraclitus, Thales of Argos has lived through the millennia of recorded time both BCE and CE, and has not only witnessed many of the great events of human history but has actively participated in them. He has communed with gods, such as Isis and Ishtar, and is privy to the secrets of the Universe. This particular narrative is built around the appearance of a great teacher in the land of Palestine at the beginning of the Current Era, one Jesus Christ of Nazareth. Thales of Argos was there to witness Jesus’ crucifixion, his death, and his ultimate glorious resurrection to the glory of Heaven. What this tale attempts to bring the reader is a greater understanding of human history, the meaning of earth’s epic events, and the clarity that all of humanity’s dreams, faiths, and aspirations are not only inextricably linked but also watched over and, where possible, guided by all-seeing, all-powerful beings.

Few books have shaken me to the core as much as The Mystery of Christ. As an adherent to much of the “new-thought” philosophies, what I discovered in this book were ideas, concepts, and philosophies that affirmed much of what I believed but more importantly showed the possible much greater depth and enlightenment that could be achieved on this path. Thales of Argos has produced a book that will have readers questioning many of their core beliefs and faiths. What impressed me most was the idea of a shared humanity, that despite our obvious differences and faiths, we are all inextricably linked as a single, powerful, and vibrant spirit. One cannot read this book and not gain some hope for the future of humanity, despite the travails and catastrophes that beset our current times. I particularly appreciated the concept that the 20th century was actually one of the darkest times in human history, rather than one of the greatest, as many would have us believe. The departure from the spiritual realm to the one of scientific and technological advancement that was the hallmark of the twentieth century was actually a negative for humanity, according to Thales and I struggled to disagree with his assessment. Put aside the controversial aspects of the story; the faith, the existence of gods, the acceptance of aliens et al and just focus on the language and the narrative and you will find that alone will satisfy your passions. The descriptive language used is so powerful, so evocative, and so moving as to take it into the realms of pure poetry in literature. I cannot stress enough how powerful this book is and I can highly recommend everyone should read it, if only for the fascinating narrative itself.