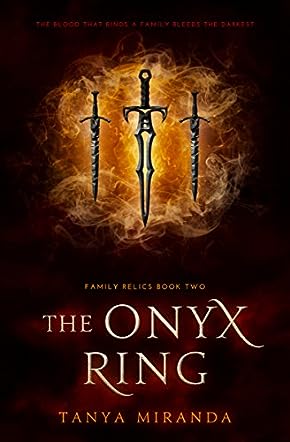 Tanya Miranda is a writer, runner, poet, and a mother of two little aliens posing as human children. Whenever she's not attending a piano lesson, softball game, soccer match, or jiu-jitsu event, she writes novels and short stories. You might find her running a 5K in the morning, drinking a Java Chip Frap in the middle of the day, or taking long walks in North Bergen in search of freshly baked bread and café con leche.

You can find her other work at http://www.tanyamiranda.com

Witches and sorcerers have been in constant conflict for millennia. When sorcerer Caderyn married witch Finna, centuries earlier, the union was meant to unite the two groups, but instead mistrust and enmity between the Clan and the Coven saw Finna flee with the couple’s child, Agatha, forever cementing the war between the two competing bodies and also heralding the unleashing of the unstoppable Gregorn dragons that will ultimately decide the epic battle between the Clan and the Coven. This is the world presented to us in the epic fantasy The Onyx Ring: Family Relics Book 2 by Tanya Miranda. Brother and sister Logan and Jasmyn are direct descendants of Finna and Caderyn. Jasmyn is the recipient of Finna’s magic and Logan has just been chosen as the heir to Caderyn’s magic. Pitted on possible opposite sides of this eternal struggle, both siblings must come to terms with who they now are and what their roles will be in the future. When one of the Clan’s survivors, Kean, plans to usurp control from Caderyn and Logan, the siblings must fight for their lives.

Although this is book two in the series, it is not essential for a reader to have read book one, although I would encourage it. It did take me some time to place all the characters in their correct order and chronology and I’m sure had I read book one first, it would have been so much easier. That having been said, The Onyx Ring: Family Relics Book 2 does stand alone as a very readable fantasy tale. Author Tanya Miranda has given us a fast-paced, exciting tale with an excellent backstory and the potential for even more in the future. Jasmyn, as the lead character, is everything you can expect from a heroic female lead and yet is beautifully softened by her angst over her younger sister’s untimely death and her desire to return in time to undo what has happened to almost destroy both her Coven and her brother’s Clan over the centuries. I particularly enjoyed the reflective moments of the characters, especially those who had lived for centuries, such as Caderyn, as the author took the opportunity to reflect on man’s innate nature and whether conflict was indeed his natural state. Tanya Miranda has a definite story-telling ability and I can definitely recommend this book to fans of the fantasy genre, or just plain action/adventure fans.