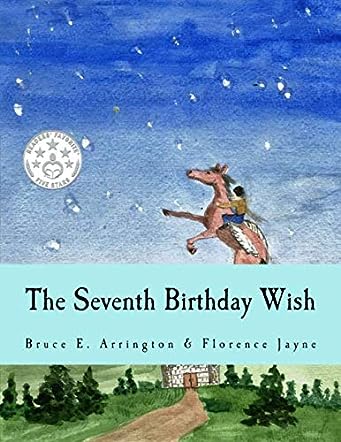 Writing a tale in poetry format made the words come alive while describing a fantasy story. I think it is best read between adults (say, parents and grandparents, for example) and children, so that the rhythm can be fully enjoyed as the story is told. This would work as a bedtime story, for example.

I also wrote the story with the idea of being able to leave all the daily fears and hassles of this world behind, and plunging the reader into a place where you can keep parts of your imagination alive, locked up safely.

The Seventh Birthday Wish is a children’s picture book written by Bruce E. Arrington and illustrated by Florence Jayne. Wesley was incredibly excited about waking up that morning. He was finally seven years old, and the magic door would open for him at last. He had wondered what was on the other side of that door ever since it first appeared when he turned four. Now, he could see the handle; it was golden and, when he turned the knob, the door opened with a rush and a sound that seemed like a roar. His mom knew that Wesley would be having a special adventure, and she had his pillow and a packaged lunch all ready and waiting for him. And while she would have preferred that he sit and have some breakfast before his day began, she understood that her young man had an important day ahead of him.

Bruce E. Arrington’s children’s picture book, The Seventh Birthday Wish, is a moving fantasy story about a small boy’s rite of passage as he turns seven, and one can’t help but get excited for him as he surveys the new and limitless world that awaits him. I especially liked the choices Arrington gives young Wesley, and the boy’s subsequent decision to interact freely with the wild and flying horses he discovers. Florence Jayne’s illustrations are marvelous! Each panel is brightly colored, and her use of watercolor washes gives dimension and vitality to the scenes she creates. The expressions on the faces of the flying horses are wonderful, and the open vistas that unroll before Wesley’s eyes are memorable indeed. This tale celebrates a child’s first rite of passage and illustrates most eloquently why force is never the solution, even when you really desire something. The Seventh Birthday Wish is most highly recommended.