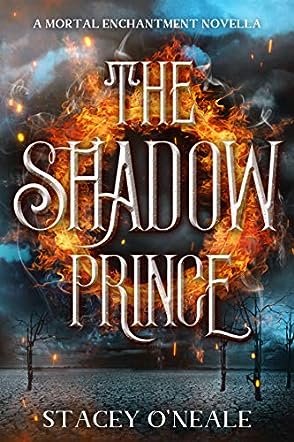 Stacey O'Neale lives in Annapolis, Maryland. When she's not writing, she spends her time fangirling over books, blogging, watching fantasy television shows, cheering for the Baltimore Ravens, and hanging out with her husband and daughter.

Rowan is an elemental of royal descent. He is young, handsome, and at the peak of his adolescence. Wandering in the mortal world, Rowan is exercising his elemental fire gift, growing up and enjoying life, when he is apprehended by his best friend, Marcus, who delivers a call to return home to Avalon at the bidding of Rowan's mother, a cruel and manipulative queen. Faced with no choice but to obey, Rowan arrives at the fire court, eager to find out if the rumours are true and his mother intends to hand over the crown to him. He is wary of her spite and is mortified to discover that she has made Marcus his guardian, a dreadful form of bondage that she knows will upset her son. The rumours are true and as Rowan's coronation is planned, the queen delivers her final blow. In order to succeed, Rowan must slay the only daughter of Taron, the elemental who has been the kindest to him throughout his young life.

In The Shadow Prince, Stacey O'Neale has delivered an action packed, adrenaline filled ride, which is the perfect prequel to the Mortal Enchantment series. From the very beginning, the pace is set at fast forward, drawing the reader through myriad tense and exciting moments. The character of Rowan is particularly well drawn, inviting sympathy and compassion from the reader for the dreadful life into which he has been unwittingly born. He is loveless, openly inviting the disdain of his mother, eventually suffering dreadful pain and humiliation at her hands, and the reader cannot help but find him likeable and take a personal interest in his plight. The hint of romance to come is nicely done, irrevocably linking Rowan and Taron's daughter, even though they don't meet properly until the very end of the prequel. There is so much conflict in this story, that the characters move from one crisis to another, keeping the reader galloping happily along to the end, eager then for the next instalment in the series.