The Sound and the Echoes 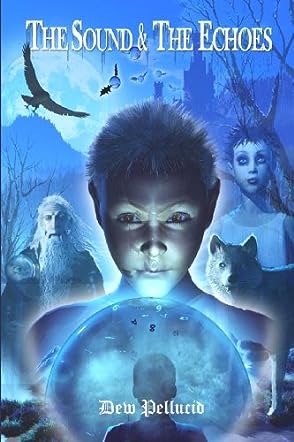 Dew Pellucid first started writing books so he might have something new to read. Indeed, of the million books at the Orphanage of Castaway Children, there isn't one his watery eyes had not perused; this taking place in less than a decade.

But now, as this old Echo draws near his one-hundredth birthday, his hunt for a good story is only rivaled by his everlasting quest after Cold Fire Mushrooms. For it was as he scrapped the bottom of his crystal ball mushroom container that Dew Pellucid first heard of Fredrick Fingeldy.

Then strange events began to happen in his beloved library. And watching faithfully down every corridor, every garden path, Dew Pellucid witnessed a wonderful story, happening there, right before his eyes (his many Eyes). And, best of all, even he had a part to play in the unfolding tale, which he set down at last in the pages of a book.

Dew Pellucid is the pen-name of Tal Boldo. Ms. Boldo is a freelance writer. Her short story, Vera Icon, won first place in Spider Thief Publication’s anthology competition (out of print). The Sound and the Echoes is her debut pre-teen novel, inspired by the Harry Potter series and published as an e-book and paperback.

"The Sound and the Echoes" by Dew Pellucid is an extravagantly illustrated and expertly constructed fantasy tale for older children and young adults. The idea behind it is both simple and so original. Our world is echoed by another. We each have our own living echo, and they are totally dependent on us in that when we die, they die. In the Echo world, the fate sealers and fortune tellers need the Prince's Sound to die so that the Echo Prince dies too. But the Prince's Sound, William, doesn’t know he has a royal Echo and he most certainly doesn’t want to be killed. He is thus unwittingly dragged into an adventure in a magical realm where, helped and hindered along the way by an intriguing cast of characters, he needs to solve riddles and overcome challenges to return the Echo Prince to the throne and release the glittering Echo realm from its cruel tyranny. He also makes his own family very happy in the process.

The author says that the inspiration for his story came from Plato with his belief that there is a place where “the true essence of things existed”. It is an intriguing and totally successful inspiration for a story. And not only can he have good ideas, but Pellucid can write. He keeps the reader completely hooked from start to finish. He creates a magical, tense atmosphere that envelopes you. Friendship, loyalty and strength of character shine very brightly in this book. Will is quite a hero - bright, brave and loyal, willing to make the ultimate sacrifice. He is an amazing youngster. And also amazing is the artwork by Andy Simmons. It is fabulous in every sense of the word. This author and artist make an indisputably top quality team.

Every time something comes to life, gas is released into the air. Two forms of life come into existence together, a Sound and an Echo. The Echo is made of gas. This gas is alive. It is a living being. And it looks like a reflection. "The Sound and the Echoes" is a high fantasy novel that takes its reader to another realm, the Echo Realm, the place where all reflections live. It is a place of see-through beings, snowy cloud-like blankets that exude warmth, flavored floating bubbles, crystal ball technology, and the Orphanage of Castaway Children. Will Cleary’s twin sister is one of those castaway children, having been stolen from the Sound Realm ten years earlier. Will discovers a way to enter the Echo Realm, and a mission far greater than just bringing his sister home.

Dew Pellucid’s "The Sound and the Echoes" starts out strong. Mr. Pellucid’s writing is beautifully descriptive as he takes us immediately into Will’s humble and sad world where his parents have lost themselves in the pursuit of finding their lost child, adversely affecting the child left behind. Once we find ourselves in the Echo Realm, Will’s story becomes a non-stop chase through a surreal, cold, and distant land. The crystal ball technology grows stale very quickly, and the cold translucence of the place left me cold. None of the characters is fully developed, giving us just glimpses into their lives, never really inviting us in. Will’s Echo guardians and adored pets, Dea and Damian, and Will’s quirky best friend, Ben, all but disappear once Will enters the Echo Realm. I would have loved to see those characters continue on with Will. However, if adventure is what you crave, "The Sound and the Echoes" delivers.

This is a delightful story, written for middle-aged kids. I found the tale refreshing and full of new ideas for fantasy. It is great reading both for hot summer days or cold winter nights. It portrays a new world shared by characters, so much alike yet so different that they will entertain young men as well as young women. Life has changed a lot for Will since the moment his twin sister disappeared when they were three years old. His parents spend their days looking for clues of how to get her back home. This has now been going on for more than ten years. The problem is that though Will understands their sorrow, he yearns for some kind of love and attention of his own from his parents. This is how life proceeds in his home until everything changes one night as his friend, Ben, brings him the book "Disappeared without a Trace." In it he finds a tale his parents haven’t shared with him. That same night, Will finds out that his pet wolf and falcon are not what they seem to be. Will, his pets and his new friend will embark on a trip that will test his sanity to the maximum in a place where castaway children live. Still, even if he manages to find what he is looking for, he may never return to his world and family. "The Sound and the Echoes" is an extraordinary tale that will be loved by many children, teachers, and their parents alike. It has very interesting and beautiful drawings to add to the overall effect of the book. It is a must in any school or home library.