The Third Kind of Magic 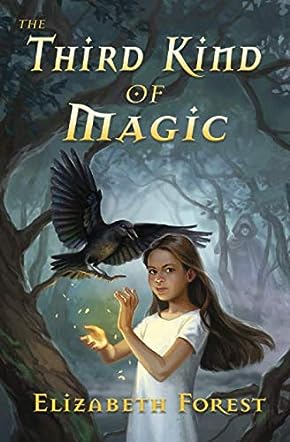 Elizabeth Forest writes historical and speculative fiction for all ages. She’s a former academic librarian who lives in Northern California. Find her at: https://www.elizabethsforest.com

In The Third Kind of Magic (Crow Magic, Book 1) by Elizabeth Forest, 12-year-old Suli Wing wants to apprentice as a wise woman. When she accidentally used magic on a girl who bullied her brother, her grandmother sent her to another village to train with a family member, Tala Wing. The often impatient Suli is frustrated with Tala, who most of the time prefers Suli to think instead of waiting for answers to be given to her. When Tala finally begins to explain more about advanced magic to Suli, a witch kidnaps her. Now, it’s up to Suli to get Tala back, but she needs to learn about the third kind of magic before facing the witch. Little does Suli know that she’s about to discover more about her family history and the fine line between being a wise woman and a witch.

Forest has created fascinating world building here. The system of magic in The Third Kind of Magic－Seeing, Healing, Voice－are unique to me, particularly the history of the Sigur folk and their shape shifting ability. It’s also avian oriented, which will definitely attract readers who are also bird lovers. These concepts are imaginative and intricate, making the story much more intriguing with its fast-paced plot. The characters’ struggles and flaws reflect on an important message; people fear what they don't understand and they judge the things they fear. Young Suli detests witches, but wants to become as powerful as them to protect her family. As a mentor, Tala is doing her best to teach Suli about the difference between magic and witchcraft to change her judgment and learn the old ways of their family. I gravitated to the well-defined and memorable Tala instantly and I liked the twist in the plot regarding the witch. Overall, this magical, coming-of-age fantasy tale is a solid read and explore its themes and concepts deftly to keep young readers interested.

At twelve years old, Suli knows right from wrong, but will soon learn that not everything is so clear cut in The Third Kind of Magic by Elizabeth Forest. Suli comes from a long line of magic users and hopes to become a wise woman like her grandmother. Unfortunately, she accidentally uses advanced magic in public and must leave the village or live with the name of 'witch.' Leaving home to live with her cousin, who is also a wise woman, Suli wonders what she will learn. Frustrated about not learning real magic, Suli spends her days tending to the garden, goats and geese while hearing about what magic can and can’t do. When Tala disappears one day, it is up to Suli to get help from the creatures who have become her friends. A wise crow teaches Suli what she needs to know about the third kind of magic which can be very dangerous, depending on how it is used. This feeds Suli’s fears about being called a witch, but she will do what is necessary to help her cousin and prepare for an eventual showdown with the real witch who lives on the mountain.

Elizabeth Forest’s debut fantasy novel for children, The Third Kind of Magic, is a delight to read! The writing style brings to mind old fairy tales and is easy to follow. There are plenty of opportunities for children and YA readers to laugh, be nervous, and join Suli in wondering what is right and wrong and how to deal with the issues that fall somewhere in between. Suli is a wonderful character with plenty of strengths, but also vulnerabilities, and watching her learn and grow with the help of a marvelous assortment of unique characters provides teachable moments for anyone. A great story with the right blend of humor, nerves and growth. Great concept and wonderful characters. The Third Kind of Magic is a book well worth reading for enjoyment and some valuable life lessons. Look for more from Elizabeth Forest in the future as well!

The Third Kind of Magic (Crow Magic) by Elizabeth Forest is a children’s fantasy tale that is filled with magic, talking animals, and wonder. This is a book that would appeal most to an audience of young readers who enjoy a mix of magic, life altering decisions, and female protagonists in their books. Suli is a twelve-year-old girl who is a natural magic user; her accidental use of advanced magic forces her to become an apprentice to a wise woman by the name of Tala. Yet, Suli’s magical training takes a bad turn when a witch kidnaps her teacher. Will young Suli rise to the challenge and save her home and Tala from the witch or will she crumble under the pressure?

The Third Kind of Magic (Crow Magic) by Elizabeth Forest is a well-written book that felt a lot like some of the older fairytale stories. I found Suli to be an interesting character in how she handled all of the big changes that affected her and her future throughout the story without breaking down. The author did a spectacular job in making Suli into a character that young girls could relate to as Suli is not some sort of unbeatable super child, but instead is a young girl whose life was turned upside down due to an accident. I personally found the story to be rather endearing and, when I finished reading it, I was left hopeful that the author will write a sequel quickly!