The Translucent Boy and the Cat Who Ran Out of Time 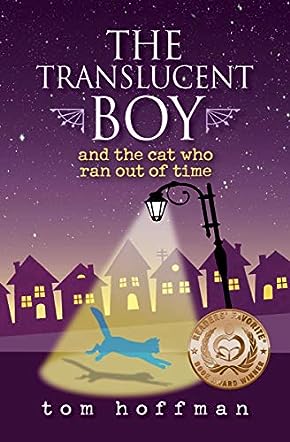 The Translucent Boy and the Cat Who Ran Out of Time is an epic fantasy for young and new adults written by Tom Hoffman. Veteran explorers and best friends, Odo Whitley and Sephie Crumb, are about to set off on a rescue mission to a sodden world where it always rains. This time, they’re accompanied by a new friend, Silas Ward, who can also see Odo, and the ghost cat they found. Having read each of the books in Hoffman’s previous series as well as the first Translucent Boy book, I opened the first page, expecting wonder, excitement, and adventure, and as with those past reading experiences, I soon discovered that Tom Hoffman had done it yet again. This wise and irreverently humorous man had created a whole new world, teaming up with his two irrepressible partners-in-crime, Sephie, and Odo Whitley, as they keep moving forward past all manner of obstacles, intent on the rescue mission which means so much to their new friend, Silas.

Hoffman’s characters fairly leap off the page, even as Odo’s room somehow transforms itself into a haunted wood. Sephie and Odo complement each other so well, and seeing their friendship progress throughout their adventures is marvelous. The plot is ingenious and mind-expanding, and the author’s skill at building visionary worlds of wonder seems unbounded. After falling in love with Hoffman’s previous Bartholomew the Adventurer Trilogy and the Orville Wellington Mouse series, I had wondered how the author, Odo Whitley, and Sephie Crumb would be able to take up the mantle and implicit challenge of those excellent works. I’m delighted to say they do so with consummate grace and ease. And while there are no shrieking ghosts in the story except in Odo’s Saturday movie selection, I was thrilled to encounter shrieking frogs instead. Shrieking frogs..not such a bad thing, right? Hoffman loves his characters and his affection for them shines forth in every nuance and conversation. The Translucent Boy and the Cat Who Ran Out of Time is easily the best book I’ve read so far this year. Yeah, it’s that good -- heck, it’s even better than that. It's most highly recommended.

There is more information in this little exchange taken from Tom Hoffman’s newest addition to amazement, The Translucent Boy and the Cat Who Ran Out of Time than one might suspect, but you need to read Mr. Hoffman’s series of books for young readers in order to appreciate all the humor and joy. This is the remarkable follow-up to The Translucent Boy (and the girl who saw him) which marked the beginning of so many world-hopping, time-traveling, alien-encountering, ghostly-visiting, mind-boggling adventures of Odo Whitley, a mostly see-through boy, and his best friend Sephie Crumb, a …. No. I don’t think I’ll tell you.

In this particular adventure, Tom Hoffman tells about a cat who ran out of time. Sorry. But he does. And in the world according to Mr. Hoffman, such an event is simply and always the Universe’s way of getting his heroes’ attention in order to accomplish mighty and important tasks. The boy is ultra-wary but courageous. The girl is super-smart and brave. Together, they are as funny as hell. (Such language does not appear in Hoffman’s books. Your kids are safe.) And if you think I’m being evasive about the plot, I am. One does not want to give away the origin of the cat’s new name, why young Silas is seeing ghosts, how Odo and Sephie do all the supernatural (err…scientific) things they do, and most especially not why Wikerus always knows what’s happening but won’t tell. Anyway, I’m out of time.

The Translucent Boy and the Cat Who Ran Out of Time by Tom Hoffman is the second book in the Translucent Boy series. Odo and Sephie are facing another normal week of going about their routine and this week it is his turn to pick the movie. Then they receive a visitor out of time whose reason for being in the present leads them to Silas Ward. Silas has a problem. The ghostly presence of a Lady in Black keeps appearing to him and, upon investigating, he discovers that she is connected to a Ward family mystery. Odo and Sephie team up with Silas to dive into a rich mystery, search for a missing inventor, and uncover the secrets about a mysterious box.

Tom Hoffman continues the journeys of Odo and Sephie with a new adventure as they make a new friend and tackle a time-bending mystery. The world is an exciting place full of possibilities and where a translucent boy isn't so strange. Blending science fiction adventure, coming of age struggles, and a ghostly presence, Hoffman delivers a fun adventure from beginning to end. Through the teamwork between the three kids, Silas opens up his life to making new friends which changes from the start of the story where Silas is fairly alone, being bullied and dealing with ghosts. While Hoffman incorporates several sleuthing elements, these are blended in with a science fiction flair and time traveling antics, including a cat who goes through time. Hoffman weaves an assortment of characters throughout for the three kids to interact with and who help them find answers.

The story also includes several Sherlock Holmes' mentions with the kids reading one of the novels at school to Watson the cat. Sherlock's sleuthing skills have a clear influence on the characters as they move forward. The kids are three ordinary kids but each of them has something extraordinary about them which makes them different. They then use their differences to help others and take on a stance as superheroes, which gives the story a bit of a playful tone and makes the story fun for any age. The Translucent Boy and the Cat Who Ran Out of Time is an adventure set in a world beyond imagination with charming characters, a delightful mystery, plenty of ghosts, and time traveling fun.

Odo and Sephie, two kids with superpowers who live in a world where magic is science, team up to solve a ghostly mystery and help their new friend. Silas can see ghosts, and he has been haunted by a creepy lady in black for as long as he can remember. Every night she appears, carrying a box and dragging a shovel into the dark basement. Who is she and what is she doing there? Did the strange, translucent cat that appeared out of nowhere once belong to her? Silas isn’t sure he wants to know. But Odo and Sephie are determined to figure out the truth of what happened, and put Silas’s fears to rest, once and for all. Their investigation turns up dark family secrets and catapults them into an otherworldly adventure.

The Translucent Boy and the Cat Who Ran Out of Time is a fun and engaging kids’ mystery. Tom Hoffman deftly blends fantasy and science fiction to create a unique world filled with quirky characters. The people and settings in Hoffman’s book are very well-written and incredibly creative. He takes ordinary concepts such as ghosts and interdimensional travel and puts his own original twist on them. Odo and Sephie are adorable, and their friendship is realistic and amusing. The Translucent Boy is part of a series but can absolutely be read as a stand-alone novel. With its strong anti-bullying stance and focus on warm friendships, this book will be a hit with adventurous young readers and parents alike.

The Translucent Boy and the Cat Who Ran Out of Time is a delightful work of fantasy fiction penned for young adults by author Tom Hoffman. In this second installment of The Translucent Boy and his adventures, we follow on from the formation of the unlikely yet perfect friendship between the frosted glass boy, Odo Whitley, and the equally odd Sephie Crumb. As they go about their normal business of helping their classmates with school struggles, Odo and Sephie meet a furry traveler from another dimension altogether, sparking a new and exciting journey across space and time.

It’s hard to top the elegant humor and charming plot lines of The Translucent Boy and the Girl Who Saw Him, but author Tom Hoffman has managed to recreate such style in a brand new exciting plot for his second installment of Odo’s adventures. As the characters develop further from quirky oddballs to emotive young people, so the story deepens and adds some darker shadows to the colorful characters at play. The new people and pets we meet have Hoffman’s stylistic charm when they are described and are full of enigmatic dialogue and humorous mannerisms that ooze charm from each page. As the plot builds and new fantastic possibilities and powers are given to Odo and Sephie, the story expands with unpredictable twists and a satisfying conclusion that will still leave series fans hungry for more. Overall, The Translucent Boy and the Cat Who Ran Out of Time is equally as whimsical and fantastic as its predecessor.