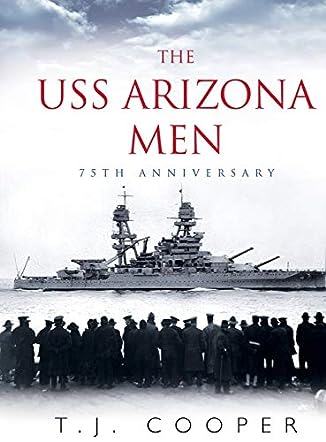 The USS Arizona at Pearl Harbor, Hawaii, a moment of tragedy captured in beautiful writing and telling images. It’s December 7, 1941 aboard the USS Arizona. People look forward to the Sunday morning service usually held at the quarterdeck, some had just returned from leave while others make preparations for theirs. It is a casual day, just like any other Sunday, and while everyone goes about their business, the Japanese launch the devastating attack on Pearl Harbor. Passengers aboard the USS Arizona are startled when bombs and bullets rain down on the vessel. The bomb that smashed through her deck delivers the last blow, sealing her fate.

The USS Arizona Men by TJ Cooper is the story of what happened, a tale of the survivors and the victims. TJ Cooper captures the tragedy in vivid language and allows readers to relive one of the grimmest moments in US history, one that compelled the US to join WWII. It takes readers through the history of the USS Arizona and the crew, comprising eighty-seven Marines attached to the battleship, five officers, eighteen non-commissioned officers and sixty-four non-rated men, and other passengers on board. While this book succinctly describes the attack and its aftermath, it is a work dedicated to the victims of the attack, and TJ Cooper does an impeccable job in presenting each of the casualties, providing vivid images from their lives, photos and background information.

It is interesting to follow these heroes, men and women who went about their duties on this fateful day, oblivious of the threat directed their way. The USS Arizona Men is a relevant historical document and a tribute to the US Navy and everyone on board the vessel. The work is diligently researched, featuring more than 900 references, a bibliography, and historical documents. It captures the atmosphere of the attack and its aftermath with forensic clarity; the images are revealing of this dire moment in US history. You will learn a lot about Pearl Harbor, but you will also be plunged into the unique tradition of people giving their lives in the service of the nation. The USS Arizona Men is an outstanding achievement!

My father is one of the last USS Arizona survivors. He and the other five survivors received the book from TJ Cooper and they couldn’t put it down. They read and re-read the book. With the 75th Anniversary coming up this year, this book will be on the table for all to reminisce and enjoy. It is truly phenomenal and something that should be read by all who want to know the stories of the men of the USS Arizona.

AWESOME...This is the best way to describe the USS Arizona Men: 75th Anniversary book...You can tell that T.J. Cooper put a lot of effort into this book to get stories and photos...The personal stories of these brave men were touching...Photos put you into that time 75 years ago...This book gave me insight into the times and the brave wonderful people my uncle served with...I am forever grateful for this well written book...It’s part of American History that should never be forgotten!! God Bless You and God Bless America!

I am so thrilled to see this documentation in writing before the true history of the Arizona is totally lost. I have had a very positive experience in my correspondence with the author of this book. I appreciate her diligence in researching the book and her truthful documentation concerning my ancestors part. I feel she has gone above and beyond the call of duty in trying to be as accurate as humanly possible in reporting her findings. I know she had to be very dedicated to find ancestors such as I who don’t share the last name as the Arizona sailor. I have thoroughly enjoyed reading The USS Arizona Men: 75th Anniversary and hope everyone who had a family member at Pearl Harbor on December 7, 1941, will take the time to read the book and remember the soldiers who gave their lives on that day and the following days of WWII. After all that is what the author is trying to do...remember that special crew aboard the ship chosen to memorialized. Thank you for your efforts and for putting my family member in print along with his picture so he may be remembered as more than just a name on a wall.