The Beyond is Part of the Here Now

The Wrong Side of the Room 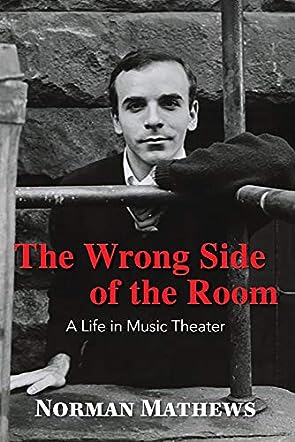 As a composer-playwright, Norman Mathews has established himself as a lush melodist and a writer of sarcastic wit and insightful observations. His work has been performed at the Kennedy Center, on radio, and at theaters and concert halls around the world. He is a recipient of numerous awards, foundation grants, and commissions. Mathews has been News Editor of Dance Magazine. Prior to a back injury, he was a Broadway and film dancer, working with Barbra Streisand, Gene Kelly, and Dorothy Lamour. Mathews’s music can be heard at www.normanmathews.com

—Kirkus Review
The author, now 76, clearly delights in detailing his life story, starting with his Sicilian ancestry and beginning with his grandparents... He goes on to present his distinguished life on Broadway with all the glow of center stage and the nerve-wracking thrill of opening night. Overall, he delivers an alluring autobiography of a man “who wore enough hats to fill a millinery shop,” . . . the book’s second half is fully stocked with accounts of stage shows galore—not to mention impressive name-dropping (Barbra Streisand, Betty Grable, Dorothy Lamour, Gene Kelly). These anecdotes from the theater’s social scene glide alongside vivid imagery from the author’s performances and other successes. The book also has a delightful, chatty sense of humor with moments of wry wit that make it exciting to read. In the end, it effectively celebrates a life of artistic inspiration alongside the giddiness and glory of live theater.

The Wrong Side of the Room: A Life in Music Theater by Norman Mathews is an autobiography chronicling the author's life as he transitions from a confusing and often abusive childhood, born in a sleet of uncertainty (literally, as it turns out). Masked by imagination and written with a humor that most would not be able to apply to such situations, Mathews is able to harness this creativity and hitch it to his own ambitions as a rising star. When an injury threatens to derail an ascent that defies all odds, Mathews is forced to reinvent and reignite himself once more, and does so amid a whole host of personal and professional turmoil, scandal, and the kind of stories that are all the more shocking – and inspiring – because they are actually true.

Norman Mathews delivers a riveting memoir with The Wrong Side of the Room that opens with a contentious genesis and powerfully surges through to its finale. This is the ultimate tale of a man who is knocked down seven times and gets up eight, except in this case our tenacious narrator is struck to the ground far more than that. But he does continue to rise and appears to have carved out a genuine niche for himself until, “I woke up one morning with a strange pain in my back and running down my right leg. In a few days, it got much worse, and I began limping.” With the support of his partner Todd, he buys a Steinway, dives into formal education, and...well, at first that all implodes too. But Mathews is the consummate phoenix and, much like he displays in the writing of this book, skillfully maneuvers the trajectory of his life's own narrative into a story that we are fortunate enough to have shared in The Wrong Side of the Room.