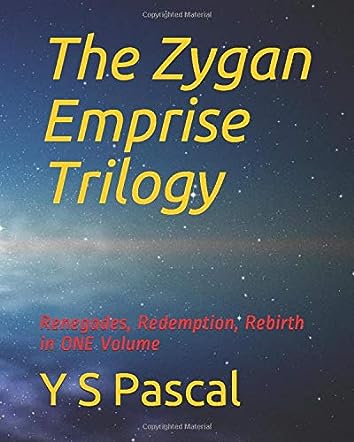 Y S Pascal is an award-winning author of science fiction-fantasy and mystery thrillers. The first book in her 5 star Zygan Emprise Trilogy won a Mensa Sharp Writ Books Award. She is the co-author of the popular fan fiction novel "Elementary, My Dear Spock", (free at the Magrathea Library), and the co-author (as Linda Reid) of the award-winning thrillers "Dead Air", "Devil Wind", and "Deep Waters". She was inspired to write the Zygan Emprise as a tale of thrilling adventure for her daughter Stacy.

The Zygan Emprise Trilogy by Y.S. Pascal features three books -- Renegades, Redemption, and Rebirth -- in a great blend of science fiction, fantasy, and terrorist thriller. In the opening book of the trilogy, Shiloh sets out to find her older brother, a secret agent of the Zygan Federation who has mysteriously disappeared. Aided by her co-star, Spud, Shiloh flies into space, but what awaits them is a terrorist threat and these terrorists are determined to destroy the Zygan Federation and bring desolation to Earth. In Redemption, Shiloh Rush and Spud Escott use the Golden Fleece borrowed from an ancient prophet and travel to a desolate dimension to rescue her long-lost brother. But do they stand a chance in the face of powerful enemies and mounting odds, including demons, vampires, guerrillas, and Valkyries? Rebirth is a stunning conclusion in the trilogy and it raises the stakes even higher. The lives of the Zygans are under attack from vicious assassins and the Zygan Federation's king, the Omega Archon, is the ultimate target. Can they beat what stands against them — terrorists, kidnappers, and mysterious powers?

Y.S. Pascal is skilled at creating tension and building a conflict that is phenomenal. The lead characters, Shiloh and Spud, are professional actors, but they lead a double life. When off the camera, they are fighters, intrepid secret agents for a covert intergalactic federation. It is fun following these two characters as they face impossible odds in very perilous missions. The setting is terrific, taking readers across the galaxy, traveling with the characters across Andromeda and the Milky Way. A lot of research has accompanied this trilogy and the author weaves the elements of the research neatly into the narrative. The prose is crisp, character development impeccable, and the pacing fast. The Zygan Emprise Trilogy is packed with action, mystery, and suspense. The reader quickly learns to care about the characters and keeps on turning from chapter to chapter, concerned about them. The unpredictability in the plot makes this trilogy a thrill for fans of science fiction and fantasy.

The Zygan Emprise Trilogy: Renegades, Redemption, Rebirth is a collection of science fiction novels written by author Y S Pascal. Collecting together the award-winning books - Renegade Paladins, Abyssal Redemption and the new Renaissance: Rebirth - this epic sci-fi collection tells the tale of heroine Shiloh Rush as she races against the clock to save her brother, and the universe itself, from intergalactic terrorists. Time travel, space travel, family ties, war, secrets, action and adventure abound as Shiloh and her Hollywood co-star Spud shun their celebrity lives for their real mission as Zygan agents. As each episode unfolds, the larger threats within the universe encroach on our heroes, bringing them closer to death with every step they take.

I loved this trilogy for its action-packed quality, which made the reading experience easy despite the book’s length. Each of the individual books rockets through the narrative like a true sci-fi adventure would on television, reminiscent of both Star Trek and Doctor Who for its time travel and episodic qualities, which then build to a larger arc overall for the two characters. Development on Shiloh and Spud was well created by author Y S Pascal, giving an initially stylish façade which breaks down as we get to know the main characters more personally. I enjoyed the unveiling of each new big bad menace, and the cataclysmic heights to which the disaster rises was like watching a Hollywood film play out in my head. Overall, The Zygan Emprise Trilogy is an excellent space adventure suitable for readers of all ages.

The Zygan Emprise Trilogy by Y. S. Pascal is a young adult sci-fi novel. When Shiloh Rush loses her brother to the army, she misses him desperately. That is until she discovers the truth of his disappearance. In Renegade, Shiloh follows her brother John's footsteps and becomes a Zygfed secret agent. Her goal is to find out what happened to her brother and fight Zygan's enemies. In Redemption, Shiloh discovers that her brother is alive and will do anything to get him back. Their rescue mission will risk not only their lives but Earth's history. The trilogy ends with Rebirth. Shiloh and her partner Spud have come a long way and have saved Earth countless times, surviving by the skin of their teeth. This time they don't face an outside enemy but the leader of Zygan, Omega Archon himself.

The Zygan Emprise Trilogy doesn't fit into the regular sci-fi genre mold. With aliens, fairytale creatures, space travel and trips through time, it has a story that will keep any reader on the edge of their seat. Shiloh is a strong heroine whom you care about right from the start. I totally loved her. Y. S. Pascal took the things we know and turned them into something different. Just when you think you know the world, something new happens and you're left amazed by the creativity. The Zygan Emprise is what the Shrek movie is to classic Disney fairytales. It will take all your sci-fi preconceptions and turn them on their heads.