The Mystery Behind the Death of Christy Mathewson
by J.B. Manheim
Fiction - Sports
280 Pages
Reviewed on 04/13/2022 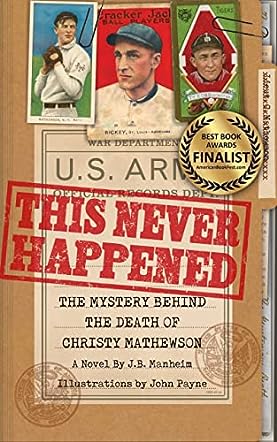 This Never Happened serves as Book 1 of The Cooperstown Trilogy.

The idea for this book originated when the author came across genuine military documents that conflicted with a widely-believed part of baseball history in WWI. The Army created a propaganda unit of future Hall of Fame players to aid recruitment to its Chemical Warfare Service, then apparently covered up the unit's existence. Why?

JB Manheim is Professor Emeritus at The George Washington University, where he developed the world's first degree-granting program in political communication and was later founding director of the School of Media & Public Affairs. In 1995 he was named Professor of the Year for the District of Columbia.

He learned his love of baseball watching Dizzy Dean on the Game of the Week and huddling with his grandfather for warmth on July nights at The Mistake By The Lake, AKA, Cleveland Municipal Stadium, and renewed it when the National Pasttime finally returned to the Nation's Capital.

Manheim brings to life his expertise in propaganda and strategic communication through his fictional stories of baseball behind the scenes. His writing will lead you to question whether what you think you know about the history of the game and about the powers who control it is real, or whether it's just a carefully nurtured product of lies, deceptions, misdirections, and propaganda.

JB Manheim is a member of the Society for American Baseball Research, the Internet Baseball Writers Association of America, and The Authors Guild.

Wow! If ever there was a rip-roaring narrative, This Never Happened: The Mystery Behind the Death of Christy Mathewson by JB Manheim is it! The novel has its origins in the speculation and uncertainty surrounding the untimely death of Christy Mathewson, baseball legend, in 1925. Facts and fiction collide as Manheim has engineered an ingenious storytelling approach involving the escapades of Jocko Drumm, a hobo. It incorporates the research of JT Willett, a baseball reporter, writing in 1936 about the legendary players to be the first inducted into the Baseball Hall of Fame. Information from JT’s actual baseball columns is also used. There is reference to the efforts of Jocko’s grandson, Jason Drumm, and his friend, Adam Wallace, to make sense of the past – all of which threads are interwoven, keeping the reader enthralled The result is an absorbing page-turner that I could not put down.

This Never Happened is completely unpredictable, as JB Manheim leaves one thread of the story to continue with another. He is a versatile writer, showing not only an ability to change voice from character to character but also an ability to change language style to match the historical period in which the story is set. Manheim’s novel is well researched, shifting with ease from the intricacies of the US rail system of the 1930s to the modern world. The focus on baseball is such that all readers may enjoy the story. In addition, the illustrations and photographs lend a level of authenticity that leaves the reader wondering what is true and what is fiction. I look forward to Manheim’s next novel.

World War I saw a drive by the United States Army to enlist high-profile baseball players into the armed forces as a propaganda initiative, aimed at promoting recruiting. That much appears to be fact. The famous names included baseball legend Christy Mathewson, who volunteered and was drafted into a military unit whose main purpose was to disarm chemical weapons. In a training incident, he was briefly exposed to deadly gas and died as a consequence some years later in 1925. From this point, speculation sets in, providing J.B. Manheim with a platform to weave an intricate tale based on a suitcase found in an old barn, which contained baseball memorabilia and evidence to support the theory that the actual cause of Mathewson’s death was the subject of a cover-up. As far as officialdom was concerned, the incident never happened and those concerned were sworn to secrecy.

It is said that the truth is stranger than fiction, but in the case of This Never Happened: The Mystery Behind the Death of Christy Mathewson, the overlap becomes blurred in the extreme. J.B. Manheim has researched the limited facts and has added a fair dose of fiction to create an intriguing novel of what might have occurred. The plot involves a pioneer baseball sportswriter who dies on a train, leaving behind the mysterious suitcase and its contents, which relate to the star players of the era. Years later, a man inherits the collection, seemingly stolen by his errant grandparent. With the aid of a journalist friend, the grandson pieces together the story as best he can. The suitcase soon goes missing and the contents are sold at auction at a considerable price. In searching for the truth, the myths and legends of American baseball are explored - both the good and less respectable, as well as the National Baseball Hall of Fame and its inductees. In the final twist of the tale, the reputation of baseball itself is under threat, posing the dilemma as to whether the truth is best revealed or buried. The book is rounded off with a revealing disclaimer by the author, as well as notes and source references. An interesting read, it should be regarded as fiction but will enthrall baseball fans and historians alike.

This Never Happened by J.B. Manheim tells of The Mystery Behind the Death of Christy Mathewson and is book one of the Cooperstown Trilogy. According to legend, baseball icon Christy Mathewson died of TB after exposure to poison gas during a training accident in France but something has always felt off about the story. Genuine army documents are discovered, showing that something completely different happened, throwing doubt on the official story touted by the military and baseball world. Mathewson was placed at a military training camp working for the Chemical Weapons Service in 1918, along with other greats, including Big Ed Walsh, Ty Cobb, and Honus Wagner. This story takes us on an alternative journey to show what might have happened to Mathewson. Was he exposed to poison gas, deliberately or accidentally? Or did something else happen that prompted a major coverup?

This Never Happened by J.B. Manheim is a fictional sports tale based firmly on fact, providing an alternative theory to what could have happened to Christy Mathewson. The result is a well-researched story, based on real army documents and journals that were once hidden, combined with a twisting thriller that you will remember long after you've finished reading it. This is the kind of story that will make you question everything you hear; it will make you wonder how much is truth and how much is pure propaganda designed to throw you off the scent. A very well-written story, this is one book you will not put down until the end. The characters are amazing, well-developed, and likable; some real people, some fictional but all adding their own style to the story. Fiction it may be, but it does offer a plausible alternative to the official story and is packed with action, twists and turns. Highly recommended for anyone who wants something different to read, especially those with an interest in conspiracy theories and cover-ups.