Tiddlers in a Jam Jar

A walkabout across the longitudes & other strange encounters
by Brian E. Priest
Non-Fiction - Travel
Kindle Edition
Reviewed on 10/17/2018 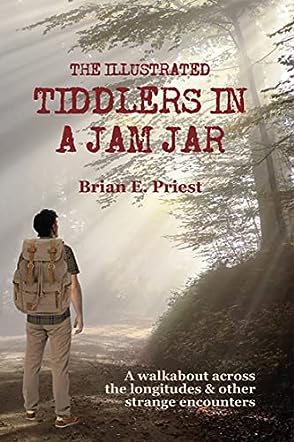 Brian is a retired editor, art director and book publisher. He has worked for international publishers in Montreal, London and Sydney. In Australia, he established the Oracle Press in 1999 for independent authors. The Oracle Press has since produced over 200 titles.

Brian E. Priest is a brilliant writer. I don’t say that very often. I think I was expecting a travelogue when I picked Tiddlers in a Jam Jar for review. This is more a ‘lifealogue,’ if one can be permitted to make up such a word. Apparently, Brian always wanted to be a gypsy with a horse and a vardo (wagon), and from his subsequent travels, it appears that he fulfilled this boyhood dream. But every adventure has to begin somewhere, and Brian’s story starts in war time Britain. One sentence stood out for me to describe the era of war time and post war Britain: “Houses were left unlocked in an era of trust.” I found that single sentence very moving (odd though that sounds), given what life is like these days as we surround ourselves with walls, electric fences, alarms, and armed response. Life, although grim and harsh post war, was very different.

Brian takes us through moments of his (to him and his friends) almost idyllic, carefree childhood which nowadays would have been considered by the politically correct arbiters of social and parenting standards to be utterly appalling, horrifically dangerous, and hazardous to any child’s health. But he survived, despite the beige school meals, and thrived, until his peregrinations took him to that far flung edge of the precipice called life. And he jumped. Into the Antipodes…to begin a new exciting adventure. There are a number of ‘vintage moments’ that will delight readers and fans of British royalty, art classes, the Beatles and John Cleese (Monty Python enthusiasts will enjoy references), with a motley crew of eccentric and memorable characters as friends, and his low-level entry into the world of publishing. From there, and after numerous hilarious adventures, Brian headed for Central America (where apparently Americans were not popular) to enjoy some dangerous encounters, some archaeology with even more dangerous encounters, North America and Canada, the mind-boggling hippie culture, and on to Europe and beyond to more adventures in a lifetime than any one person deserves!

This book is an Aladdin’s cave of treasure for the reader who enjoys writing that engages the senses as well as one’s appreciation of great writing. There is just too much worthy writing to do this book justice in a short review. The author’s humour and wit are dry and subtle. Don’t rush your reading or you might miss some deliciously sly descriptions. Each sentence is a polished visual gem, drawing the reader into the events unfolding or the situation described. I confess to going back and rereading sentences I particularly enjoyed. Brian made me laugh out loud on more than one occasion. To be honest, I think I had a laugh on every page. His style is succinct, sometimes choppy, and yet the whole flows in a lyrical way, carrying the reader smoothly along on a never-ending river of images. For me, the imagery evoked in just a few sentences is something I have hardly ever found. What makes it even more enjoyable is that the creation of the imagery is somehow effortless. I have read books where the author drowns their readers in a sea of words, trying to get the point across or create a picture. Not so here. Each sentence does its job perfectly. Nothing is extraneous.

I enjoyed the layout. Each chapter starts with an appropriate image and a brief outline of the contents. This is unusual but perfectly suits the author’s style of writing and the contents of this book. Is this a travel memoir, a life adventure, perhaps literary nonfiction? Maybe a bit of everything. I absolutely adored this book. I would encourage anyone who enjoys memoirs, travel adventures, and literary writing to grab a copy and sneak off to while away some time in a wholly immersive adventure. The author has enjoyed an enviously enormous amount of fun in his life. A must-read as well for anyone who remembers catching tiddlers and putting them in a jam jar…

The author’s incredible life journey takes the reader from Britain’s wartime slums, to the hysteria of Trudeaumania in Quebec; along the Hippie Trail spanning a third of the planet, getting lost in a central American jungle and meeting with several real-life challenges while searching for a lost city, and later for Yamamoto’s wrecked aircraft in the wilds of Bougainville. He also sailed a yacht in the South China Sea while dodging pirates, and learning how to sail it on the way, never having learned to swim. To witness flying priests leaping off volcanoes and fleeing the Indonesian island of Ambon under cover of darkness to evade corruption.
The award-winning Tiddlers in Jam Jar is well written which is what you would expect from a seasoned journalist. The story is lively and engaging, taking the reader on an hilarious and fascinating journey of sometimes perilous adventure. You never know what to expect next.
The author finally ‘settles’ down in rural Australia and to live a self-sufficient lifestyle until the south pacific beckons and off he goes again.

What sheer joy it is to read a book such as "Tiddlers in a Jam Jar". It is so many books in one: a poignant, funny recalling of a childhood in wartime and post-war Britain; an engrossing tale of serendipitous journeying around the world; a vividly descriptive, witty, sympathetic catalogue of quirky places and characters encountered on the way; and perhaps most importantly, a very personal book written with elegant, articulate and utterly unique literary style.
"Tiddlers in a Jam-Jar" is a delight, and Brian Priest is a marvellous writer.