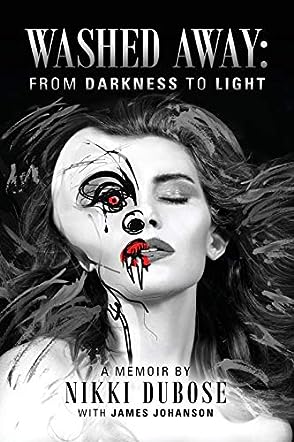 Nikki DuBose, a former model turned author, speaker, and mental health advocate, recently released her memoir, Washed Away: From Darkness to Light. In Washed Away, Nikki recounts her experiences navigating the dark side of the modeling industry, while battling abuse, addiction, and various mental health issues (sexual victimization, eating disorders, alcoholism, drugs, depression, suicide attempts, body dysmorphic disorder, PTSD, psychosis). She recently appeared on the Oprah Winfrey Network on the TD Jakes Show to speak about her recovery from Body Dysmorphic Disorder and eating disorders, and how the pressure to "fit into" the modeling industry nearly killed her.

“By my early twenties, I was modeling professionally and appeared on the covers of and in editorials for magazines such as Maxim, Glamour, Vogue, FHM, and Vanity Fair. But while my career was going exceptionally well, my private life was falling apart. My mental and emotional health were in shambles. I went from one extreme to the other to meet weight requirements for photo shoots, and quickly fell into anorexia nervosa. At times I struggled to survive, beginning to abuse diet pills as a way to achieve the figure that my agents were pushing me to have for fashion shoots,” says DuBose.

Because of the lack of laws and protections, models have long been subjected to sexual and financial abuse, bullying from agents, and have been pressured to lose so much weight that many have developed devastating, even fatal eating disorders.

Nikki’s recovery from a nearly lifelong struggle with PTSD, psychosis, addictions and eating disorders has left her with a passionate longing to help others who are also suffering. Although the modeling industry has made strides towards body diversity in the past couple of years, there is a lack of education and awareness surrounding eating disorders and other mental health issues. Washed Away: From Darkness to Light serves as a testimony to others to let them know that they are not alone in their fears, doubts, and frustrations, and that through recovery all things are possible.

Washed Away: From Darkness to Light, a memoir written by Nikki Dubose with James Johanson, is a series of dark memories of her dysfunctional family life, and the misery caused by addictions and abuse. Nikki Dubose recounts the tragic story of her life, dealing with severe eating disorders and mental challenges. Her sad story reveals a less-than-glamorous look at the world of modelling. While she is not casting aspersions on the high class world of models, she does reveal how physical and mental issues can greatly affect the choices one makes. As family and friendships come and go, and people accept then reject her, she finally grasps an opportunity to turn from her ugly duckling persona in order to become a beautiful cleansed swan – metaphorically speaking.

A powerful story in which Nikki reveals the good, the bad, and the ugly of many aspects of growing up in a highly dysfunctional home. Loving was always beyond her reach until she realized that one simple step could help her. This is a graphic tale of her young life, her adult choices; her failed relationships and self-hatred. I felt myself wanting to reach out and shake her, while trying to understand the rationale behind her life decisions. Of course, not having been exposed to some of the horrors that she has, I found that difficult to do. The book goes into great, lurid detail of eating disorder behaviour, and contains a lot of profanity. I found it a hard book to read, but one that is very compelling in the message it delivers. Not an easy read. I would recommend this book for adults only.

I love this book, it really resonated with my own struggles with body image as I was a competitive swimmer for many years. It is a hard read, but one that will help many.