When Ash Rains Down 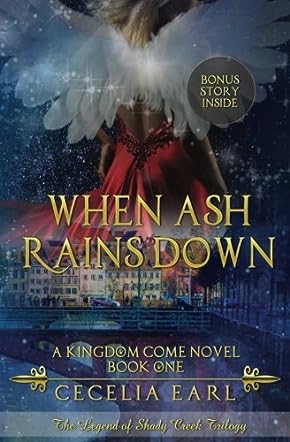 Cecelia Earl graduated with a degree in education and has been teaching ever since. She’s a wife, a mom of three boys, and an owner of a magical laundry pile that never stops growing. She lives near enough to Green Bay, WI that her refrigerator is always stocked with cheese, and the first colors her children learned were green and gold. She’s a teacher by day, a mom always, and a writer in her sleep, but that’s okay because being an author is a dream come true. She writes angel books for young and youngish adults. If you feel young, she writes for you—whether or not you feel particularly angelic.

When Ash Rains Down by Cecelia Earl is the story of hardship and hope. Teenager Julia has a routine: work, study, school. She doesn't have time for friends, and certainly doesn't have time for fun. When her father left them, he took away her faith and carefree spirit. Since the day he left, she's worked as hard as she could, determined to give her mom and brother the life they deserve. When the guy of her dreams suddenly takes an interest in her, and a mysterious guy shows up claiming that demons exist, her life seems to take a strange turn. Her mom's diner is nearly robbed, and she swears something about the thief wasn't right. It was something demonic. Thrown into a classic battle of good versus evil, Julia learns that the world is more complicated than she thought, and she's caught in the middle. In order to protect those she loves, Julia will have to battle her greed, and determine on which side she belongs.

Cecelia Earl brings humanity to this fantasy tale. Julia isn't perfect by any means, but her striving, her misguidance, and her willingness to give up everything for her family is easy to relate to. When Ash Rains Down is surreal, idealistic, and full of heart, with a moral tale at the center, but also has a balanced side of loss, struggle, and tragedy. It's fast paced, and follows a small portion of Julia's life, but in a way that feels like just the beginning of her story. It almost has a metaphorical tone with what is happening in Julia's life and then the coinciding apocalyptic angels versus demons battle. When her father left, he took away her happiness and her faith. She was taught about angels singing and praying at night, but his leaving took that from her. She goes from this carefree spirit as a child to a determined and materially driven person, who is then thrown into a higher power of the world. There's a good lesson in Julia's arc, aimed at a younger audience.