Heart of the Journey 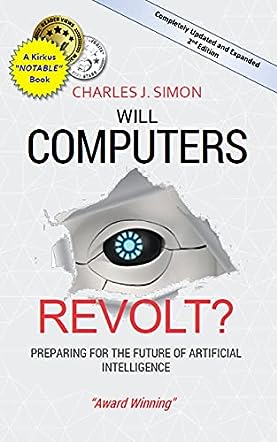 Charles J. Simon is a nationally-recognized computer software/hardware expert, author and speaker. He is noted for two artificial intelligence (“AI”) systems and three generation of Computers Aided Design (“CAD”). His most recent book is the successful Will Computers Revolt? Preparing for the Future of Artificial Intelligence. Professionally, he has worked on numerous major software projects including Microsoft's MSNBC.COM. He holds BSEE and MSCS degrees and is a member of IEEE, AAAI, and AAAS as well as the high-IQ societies: Triple-nine, Intertel, and Mensa.

Will Computers Revolt? Preparing for the Future of Artificial Intelligence by Charles Simon is a thought-provoking book that not only engages information and digital technology buffs but anyone that cares about the future of humanity. While this book recognizes the astonishing advancement in AI (Artificial Intelligence) and the wonders it does for humans, it poses a complex possible and inevitable situation, asking the question: What if in the future, and even in the very near future, computers replace human intelligence and consciousness completely? It is a question that is troubling and has inspired great works in the area of science fiction; nonetheless, it is one that is continually becoming as relevant as it is real.

Reading Charles Simon’s book will drive the reader to rethink the implications of AI. Will Computers Revolt? postulates that computers will soon be more intelligent than humans, which already is happening, growing in consciousness. These computers will be created in the not-so-distant future and the creators of such computers will even become their slaves. The author’s writing is crisp and accessible and the entire book is filled with examples that are familiar to readers. The hints are relevant enough to make any reader shudder. But should there be cause for fear? No! However, everyone should be concerned about the power that future computers will possess and this book offers a practical step to avoid a possible disaster and a situation where AI takes control of the running of human affairs. Will Computers Revolt? Preparing for the Future of Artificial Intelligence is a must-read warning to humanity and to scientists, a book that is meticulously researched and logically presented. The scenarios in the last part of this book are groundbreaking and eye-opening, suggesting possibilities for the future reserves for humanity. It is mind-blowing, prophetic, thought-provoking, and essentially informative.

Will Computers Revolt? by Charles J Simon examines the possibilities that one day man, having built bigger, faster, more intelligent computers, might lose control of them and even be in danger from them. His first explanation is that of intelligence, the way the human brain works, recalls, and solves problems in comparison to the brain inside a computer. Today computers think faster, absorb information, and have infallible memories after one input. Computers can outperform the human brain. But there is a difference between AI (Artificial Intelligence) and AGI (Artificial General Intelligence), the learning process of all-natural brains based on past experiences and the ability to adapt from one scenario to another. While man can develop driverless cars and talking robots, since he does not fully understand how the human brain works, writing programs to copy this is difficult. There is also the problem of built-in safety measures to ensure AI machines will not harm humans, even when they have perfected the ability to replicate their learning programs to other robotic devices. While computer specialists can create the necessary neurons and transistors and connect one to the other, human brains use imagination in evaluating actions and reactions, thus there is still a big divide. Despite that, the author warns we are much closer to creating self-educating machines than we think. The third section of the book covers modeling with the Brain Simulator and is most suitable for those who are competent programmers.

In Will Computers Revolt? the author goes into great detail on comparing human brains through evolution and the speed of progress in constructing super-fast AI intelligent machines. He uses simple language with many illustrations to make his points very clear and follows each of his arguments step by step. At the end of each chapter, there are links to videos to illustrate his point of view. I appreciated that the book did not frighten me too much. The idea of machines controlling us is not a comfortable one, yet it will be impossible to halt progress, and, he contends that in the short term the power of profits might well override the fears. I found this book fascinating, but there is so much information that you need to take it slowly and digest each chapter before moving on to the next.

As Charles J Simon suggests, even the most basic user of any AI equipment should educate themselves on the benefits and dangers that may result from AGI machines. At the end of the book, the author suggests four possible outcomes once AGI robots have been perfected, at least to some degree. However, he ends on a positive note in that it’s unlikely that even the most advanced AI is likely to attack the human species as it would be self-harming. He sees a time when humans and computers live side by side with the human race, but while we exhaust the world’s natural resources machines will not have that problem and will become the dominant intelligence source on the planet. I particularly enjoyed the fictional story at the end of the book.

Will Computers Revolt? (2nd Edition): Preparing for the Future of Artificial Intelligence by Charles Simon is not just timely but is a provocative essay that serves as a prophetic message and a warning about a looming danger if the right actions are not taken today. The author gives readers a compelling and realistic premise: Artificial Intelligence is already a reality and it gets perfected every day, and it can get out of the control of humans. With the exponential growth in AI technology, the author asks the most important question: Will humanity reach a point where intelligent computers will take control of life? This book argues that it is very possible if care is not taken, because the future computers will think faster and better than humans.

Computer revolution is not something we read only in science fiction; it is a reality. Our dependence on computers pushes computer scientists to seek perfection and to design AI technology that can replace most of what humans do. An example would be a self-driving car, and while these achievements are laudable, they pose great dangers to human civilization. This book features compelling scenarios of what might go wrong with AI and how humans can find themselves at the mercy of computers. Readers will understand how Artificial Intelligence works, get insights into the evolution of computers and understand the dangers they pose. This is an informative and thought-provoking book that engages all kinds of readers who think about the future. Will Computers Revolt? is a well-researched and eye-opening book that informs readers of what needs to be done to save the world from the computer revolution; it is written in beautiful prose, packed with strong scenarios and compelling arguments. This book is a warning that should be taken seriously, a warning from an expert who knows exactly what he is talking about.