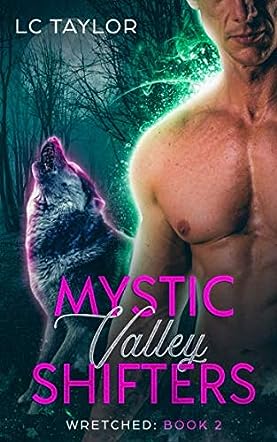 I currently live in the Atlanta area with my Husband and children. While writing is not my full-time job, I would call it more than a hobby. I love all things romance, erotica, paranormal - a little bit of everything. Reading is an addiction for me, on average reading 300+ books a year. I always wanted to write a novel, finally pushing myself to do it. I'm a fantasy telling, romance writing, dream-weaving story creator. I hope to inspire just one person to take the plunge and write their stories too! Learn more about me and my books at www.lctaylorpublishings.com

Tessa is driving herself crazy, thinking that Haven's current coma-like state is all her fault, and maybe in a way it is, but no one blames her, she is the only one that can pull Haven out of it. She has to make him believe that what she tells him in his dreams are true, which - by the way - they are. Wretched is the second book in the Mystic Valley Shifters series and, to be honest, you could actually get away with reading this one without having read the first one and still be up to date with story events. Author LC Taylor has given Haven and Tessa their own book, whereas the first book was mostly about Dylan, and her discovering what she was and then discovering someone had taken Jensen. It did introduce a nice cast of characters for a very readable series.

Wretched describes first Tessa, while Haven is in his coma-like state, and then later Haven, when Tessa goes into the same coma-like state. To say that nothing much happens in Mystic Valley would be the biggest understatement ever. This little area has a lot going on and there is always some reason to watch out. You find yourself wanting to go back time and time again to find out more and more about the people there, and see who the next story is going to be about and the next and the next. Author LC Taylor has created a series in only two books that has readers waiting eagerly for the next book. Definitely an adult book; the intimate scenes are between fated mates and tastefully done, but still, as a mom, I would prefer my teenager not to read them.