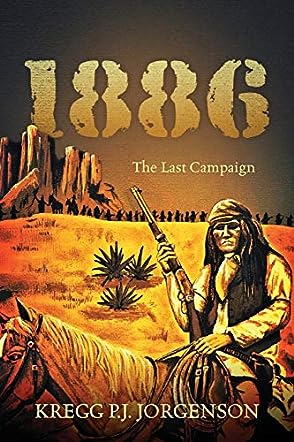 Kregg P.J. Jorgenson pens a gritty tale of the west in 1886: The Last Campaign. Hanford Jones, a veteran of the Civil War, retreated to the West, ultimately becoming a scout for the army. Believing his days as a scout were over, he thought he would do a little silver prospecting. In the heart of the Arizona Territory, Hanford Jones finds himself without a horse and chased by Indians. Fortunately, the Indians flee when the Ft. Bowie Cavalry approaches, saving the day, and quite possibly Hanford’s life. Among the cavalry were some of his best friends from his scouting days. Leaving behind Emma, a young German immigrant, whom he has fallen for, but would never admit it, Jones joins his friends again for one last hurrah in the final campaign to capture the renegade Indian leader, Geronimo.

Kregg P.J. Jorgenson did his research and wrote an entertaining western tale in 1886: The Last Campaign. This narrative contains all the elements of a good western: Indians, dust, and the trail. Jorgenson shapes the story with a raw and rowdy cast of characters. The characters are a band of unlikely friends, each one with a distinctive background, creating an enjoyable and amusing story. The conflict of the novel is of course, man against man, in the form of the US Army against the last remnant of the Indian nations, namely the Apaches. However, Jorgenson takes the plot and the action deeper. He includes German immigration, the lingering effects of the Civil War, and most surprisingly, the genesis of the soon to be American number one pastime – baseball. All these additional factors make this western novel stand out in its genre. Although the main character doesn’t ride off into the sunset, this rough and tough tale ends in a light-hearted jovial manner, leaving the reader content and satisfied. Well done, Mr. Jorgenson.

Kregg P.J. Jorgenson's 1886: The Last Campaign is set during a tumultuous time in American history, known as the last phase of the Apache Wars. As the US military uses both force and persuasion to relocate the Indians to reservations, small renegade Indian bands continue their deadly attacks on American settlements. They are engaged in a losing fight against the United States Cavalry expeditionary forces and the local militia. Hanford Jones, a contract scout for the Army in the Territory of Arizona, is involved in the hunt for renegade Indian leaders Geronimo, Naiche, Chihuahua, Cayetano and others under the command of General Crook. Emma, on the other hand, is a young German immigrant who comes to America with an abusive husband, searching for a better life. This is their story.

This is a western fiction novel about Hanford and Emma who lived during an uncertain yet promising time in American history. Action packed and fast paced, it captures the bloody transition of the United States when the campaign against the American Indians is about to end and the nation is poised to attain peace and prosperity. Kregg P.J. Jorgenson is a master storyteller who can creatively blend romance, humor and action into a powerful story that is also historically informative. This novel recreates the lives of people who are caught in the events of an extraordinary time. And it is heartening to note that, in spite of all the violence and uncertainties around them, they continue to dream and hope. I highly recommend this novel!

There was a time when Indian scouts rustled out a living in the U.S. wild west, living colorful lives that are still of interest to readers today. Taking note of historical events, Kregg P.J. Jorgenson offers up a colorful dramatic fictional work, bringing to life a lively cast of characters in 1886: The Last Campaign. Taking center stage is Hanford Jones, who after losing his entire family in the Civil War, made his way out west. There he rescued a young woman, Emma, whom he later came to love — but only after she, in an effort to earn a living in the difficult west, spent a short time as a prostitute at Miss Ophelia’s brothel. When Jones, along with his friends including, among others, Al Sieber, Ben Nyhavn, and the “green” Lieutenant Braxton, join a mission of scouts that travels into Mexico to hunt down the whereabouts of Geronimo, Jones’s plans for a future with Emma are put on hold. Roughing it in the wild, finding unlikely friends amongst the Apaches, and unlikely enemies amongst the armed forces commissioned to bring an end to Geronimo’s renegade days, Jones must make it out of Mexico and back to Arizona and Emma if he is ever to enjoy his dreams for the future.

In 1886: The Last Campaign, readers are treated to some history of the survivors of the American Civil War, the early days of baseball in the U.S., and more. From the opening pages in which Indian warriors ambush Jones, the journey is action-filled. Kregg P.J. Jorgenson has breathed life into his fictional characters, particularly through the ready wit of Jones and Sieber, the true maturing of Braxton, and the rendering of Emma’s story. He offers a glimpse into genuine friendships amongst the men, the growing understanding between new and native Americans, and the antics of baseball lovers in the early days of the sport. With 1886: The Last Campaign, readers will step back in time for a glimpse of both the real life difficulties and the genuine pleasures of the era.