A Century of Secrets 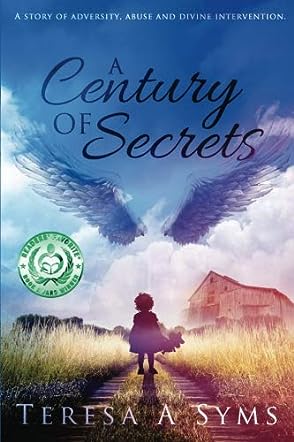 After experiencing a life-time of abuse and loneliness, in 2003, Teresa believed she had escaped her past. Suddenly in 2007, her life almost ended in a car accident. Facing life with chronic injuries is a daily challenge. Teresa has spent the past ten years rebuilding her life. She is a Life Coach who has incorporated her two passions of writing and helping others to break free from their pain.

Determined to fulfill her destiny, Teresa embarked on her journey of healing and discovery. She began writing her story of how deep-seated family scars have impacted the identities of her family for multiple generations. Teresa’s writing gave her the wings to conquer the traumas of her past and in her life-altering, award-winning book, A Century of Secrets, she highlights the adversity, brutality and survival of herself and other family members.

Teresa has proudly stepped into her future as an Multiple Award-winning Author, three-time #1 Bestselling Co-Author, and Coach. She is living proof that through courage, determination and a strong belief, you can give make your dreams come true.

A Century of Secrets by Teresa Syms is a gripping story of a family, covering its history over a century and the main players that have given it the visage it has. Readers are introduced to a character who has been through a lot of pain because of the lies, abuses, dark secrets, and intrigue played out in her family over the period of a century. The story explores the conflicts, the deceptions, and the protagonist’s struggle to redefine herself and reconquer her inner freedom. Here is a story that many readers will relate to, the story of a family with its own struggle to function normally.

The reader will be surprised at the honesty of the narrator whose voice comes across powerfully. Teresa is a character that readers will love to know better because she carries in her a pain that many people bear in silence. But how she overcomes depression, finds her voice, and stands up for herself is a lesson that will speak volumes to readers. Just after describing a horrible scene in which the protagonist gets violated by a medical doctor, the narrator notes that: “Teresa’s life was a tortured hell without her love. She became moody and very depressed.” The writing is beautiful, featuring powerful and vivid descriptions that allow the reader to clearly imagine the scenes, the characters, and the action. It is well paced and Teresa Syms has succeeded in getting the reader interested in following the characters. A Century of Secrets is a story that powerfully documents what repression and abuse in the family setting can lead to; it’s a courageous story that explores freedom and the determination to create a life of meaning. Highly entertaining!

A Century of Secrets by Teresa Syms took me a little time to read, but at the end I’m glad I read it. It is not often that you come across a piece of art that you can connect with, and this book is not something that I will forget any time soon. This book is the story of Teresa and how she fought the odds and came out a little bruised and battered, but still a winner. This is the story of Teresa trying to find herself, her soul, and her inner courage to restart her life.

Teresa faced a terrible accident and her career almost ended. However, she refused to accept that. She was ready to fight for herself. With this determination settled in her mind, she brought her passion for writing to life. She discovers that as long as she is writing and helping other people, she is happy. But it is not all well; she has to fight, claw and crawl out of the despair of everything happening in her life and in the lives of the people around her before she can find true happiness. But she is on the right path and she is not giving up! Not yet! Not ever!

I am in awe of Teresa Syms’ courage and her belief in herself and her abilities. Even with a traumatic past trying to hold her back, she did not give up. I absolutely loved the way she wrote this book. Her writing style is very refreshing. It connects with the reader. I could actually imagine everything inside my brain, I could form pictures, and I could feel what she was feeling. This is a very good book and I absolutely loved the cover as well. Brilliant.

Based on real life stories, A Century of Secrets by Teresa Syms is a riveting family saga, a multi-generational story that uncovers the lies, the deep-seething hurts, abuses, and horrors experienced in one family over many generations. Starting with the birth of a beautiful young girl on February 2, 1891 in Koolscamp, Belgium, the author takes readers on a family odyssey that covers many decades, a story that ends with a fifty-something-year-old Teresa. Take the journey with the protagonist as she digs deep into her family history to face its reality and to answer the troubling questions that have been with her over many years. Read to discover how she stood up against an enforced pattern that has caused a lot of suffering in her family. In this story, she will show readers the dangers of keeping family skeletons in the closet, and how we can be conditioned to give our freedom away just so easily.

It takes a lot of courage to face the truth. It takes an even greater courage to face one’s truth, and therein lies the secret to real freedom. Teresa Syms possesses this courage. Apart from that, she has the clarity of thought that will wow her readers. She writes with simplicity and her voice comes across powerfully, brutally honest. Readers will enjoy the protagonist, the way she develops, and her decision to change the status quo. A Century of Secrets could be the story of one family, but it is one that reflects the reality taking place in many of our families. I enjoyed the way the author articulated the different themes in the story, especially brotherhood, family intrigue, suffering, and redemption. This is a well-written story with powerful lessons for readers of this era. In these pages, the reader will find the secret to freedom, to real inner freedom.

In an intriguing and extremely riveting true account of the life of one family, A Century of Secrets by author Teresa Syms is a story that will keep readers obsessively turning the pages from the start all the way through until the very end. Following the story of Teresa's own family all the way from the year 1911 through multiple generations, readers will learn of her family's struggle with abuse and identity, and how those struggles led to alcoholism, suicide and a deeply wounding legacy. The author recounts her personal struggles and journey in dealing with her family relationships, and her desire to overcome her past in order to live a more productive and healing future. Will Teresa be able to break through the negativity she has lived with since her childhood in order to become the person she wants and deserves to be? You'll need to read the book to find out.

Wow. Just, wow. How's that for a review? Well, it is definitely how I felt about A Century of Secrets. Author Teresa Syms has done a wonderful job in recounting her painful past, with what is obviously a strong desire to provide guidance for others who may be dealing with similar situations in their own lives. Her courage in sharing this difficult story does not go unnoticed. Any reader who is looking for a good non-fiction book with a message of hope for those coming from very difficult family situations should absolutely read this book. I am very pleased to be able to highly recommend A Century of Secrets, and hope that author Teresa Syms will continue to write. I, for one, will keep my eyes open for the next work by this promising author.

A Century of Secrets is an ambitious endeavour, but one that author Teresa A Syms believes is worth the effort and the time it no doubt took to write this 470-page book. It’s ambitious in that it is a combination of memoir and biography, in which Teresa details the difficult lives of several generations of her female predecessors. Hence the title, A Century of Secrets. Most of these women were the victims of physical, mental and sexual abuse, and the prevalence of incest over that 100 years guaranteed secrecy, shame and denial on all levels of the families. Essentially all the women put up and shut up, because that’s what women were expected to do.

Readers don't actually meet the most important person in this book, the author herself, until a quarter of the way into the narrative. When we meet Teresa Syms, she’s just been born with two club feet. It’s a difficult physical entry into her world, but as her father points out, she’s a fighter. And fight she does for most of her childhood, teen and young adult years. She stands up to hateful sibling abuse, endures violent parental mental and physical abuse, and refuses to crumble beneath spousal abuse. But her physical health is constantly threatened and it’s a wonder she doesn’t cave under years of physical pain and mental torture. I appreciate how much she endured: it was certainly a lot, especially health-wise, enough to break the strongest person. And of course, that’s what makes her book an achievement of which to be proud. Teresa Syms has had an intimate relationship with hardship, but she also knows that what doesn’t kill us makes us stronger. And that is the message of A Century of Secrets.

Today, Teresa Syms is the Founder and Owner of Sterling Silver Coaching through which she “helps her clients shed their limiting beliefs and build strong emotional foundations.” She encourages them “to live the lives they deserve.” She also hosts a radio show titled “Powering Through Life” and there’s no question about it: Teresa Syms has powered through life. Her book, A Century of Secrets, may convince other abused women they can do the same.