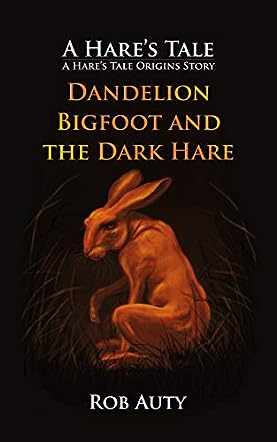 A Hare’s Tale 17: Dandelion Bigfoot and the Dark Hare (A Hare’s Tale Book Series) is a children’s book that isn’t really a children’s book. Author Rob Auty has produced the latest in what is clearly a long-running series about Dandelion Bigfoot, the Golden Hare. Although it is a book that is primarily aimed at children, the dark themes that run through this narrative would probably be too scary for most young children. Dandelion Bigfoot is THE Golden Hare, the undisputed leader and ruler of the forest lands. That is until the arrival of a usurper on the scene. There is a hairless hare in the neighboring forest who is making claims to be the Golden Hare. What is more worrying, however, is that this hare is not only unusual in its appearance, being hairless, but its genetic makeup and that of its progeny also differs from your average hare. It is carnivorous and it uses its power to dominate and subjugate the other denizens of the forest. Anyone who will not bend to the Dark Hare’s ways must be killed or banished from the forest. It is clear the Golden Hare must come to the rescue of the forest’s creatures and restore nature’s balance before it all spins totally out of control.

A Hare’s Tale 17 may not be suitable for young children but it is eminently suitable for all other ages and yes, I do mean adults in this assessment. Author Rob Auty has crafted a tale that resounds with important concepts about nature, our relationship with the earth, and with other animals. It is a beautiful allegory of life and balance. I was immediately captivated by these characters, especially the humility and strength of the Golden Hare. He epitomized the caring nature, the need for environmental balance, the desire for peace and perhaps most importantly the ability to forgive. This is a short but very powerful read. I was totally impressed with the author’s descriptive writing style that flowed seamlessly and transported the reader deep inside the dark, forbidding forests that the animals in the story inhabited. What I found particularly inspiring was the relationships between what might be called “traditional foes”. When faced with calamity, these foes were able to band together and fight for common justice and what was right and balanced. We could all learn from that. A really inspiring read and one I can highly recommend.

A Hare’s Tale Part 17: Dandelion Bigfoot and the Dark Hare is a work of animal-themed fiction written for children, and it was penned by author Rob Auty. Following the extensive adventures already present in the Hare’s Tale Series, we now find central protagonist Dandelion desperately seeking peace. But his dreams plague and frighten him when he keeps being killed by the same eerie figure of the Golden Hare, and so Dandelion knows that a new quest is ahead to discover the meaning of this nightmarish portent. What follows is an adventure to a dark forest far from home, against impossible odds and conditions which our hero doesn’t fully understand until he’s already in too deep.

Braver middle grade and young adult readers alike are sure to dive into this genuinely thrilling adventure, which has plenty of ups and downs despite the dark onset of its initial themes. Author Rob Auty describes Dandelion’s dreams with high tension in his sentence construction, and complex atmospheric imagery which really raises the game for a child’s reading experience. Adults who hark back to powerful tales like Martin the Warrior and Watership Down are sure to recommend this read to their youngsters for its depth of story and strong animal characters that reflect the best and worst parts of ourselves to form true tales of heroes and villains. Overall, A Hare’s Tale Part 17: Dandelion Bigfoot and the Dark Hare is an excellent children’s story with high-quality writing and real adventure.

Rob Auty’s Dandelion Bigfoot and the Dark Hare: A Hare’s Tale 17 teaches young and old alike life lessons about judgment versus tolerance of others. By working in cooperation with animals that are different than him, Dandelion Bigfoot succeeds when alone he would have failed. Readers appreciate the advantages of seeing the good in others and seeing beyond their enemies' actions to who they are inside. Young people can learn to understand what makes people act the way they do. Auty writes an exciting adventure story with lots of moral messages.