A Petition to Magic 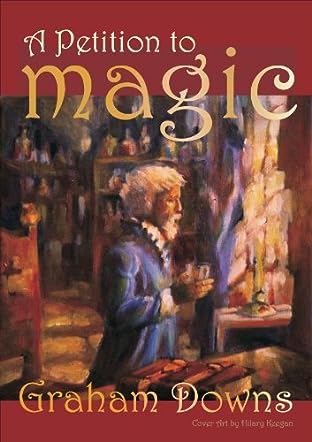 Graham Downs is a South African author of short stories, flash fiction, and novelettes, in a variety of genres. Memoirs of a Guardian Angel is his longest work to date.

He currently lives in Alberton, Gauteng, with his wife and their dog, Becky. He spends a good portion of his free time reading and, as with his writing, he reads books in a huge range of genres and lengths. He’s also passionate about South African authors—particularly independently published ones.

Graham's publishing journey began in 2012, with his first book, A Petition to Magic, which is a fantasy short story about a wizard who refuses to perform magic, and a queen who insists that he do just that. He freely admits that back then, just like John Snow, he knew nothing (now, he knows perhaps a trifle more than nothing).

Since those fateful first steps, he's never looked back, publishing five more books in almost as many genres, as well as getting a story included in the charity anthology, I Am Not Frazzle! (And Other Stories For Grown-ups).

His latest work, Memoirs of a Guardian Angel, was launched on 6 April 2018, and is available in both e-book and paperback formats, from a wide variety of retailers.

Graham Downs opens the door to a fantasy world in his short story, A Petition to Magic, a world of emotions, trust, self-searching and enchanted characters that will definitely leave readers wanting more. The fantasy tells the story of a wizard and his difficulties in dealing with a guilty secret; and a young Queen and the way she’s dealing with her new status -a classical right and wrong situation which captured my interest from the very first lines.

A Petition to Magic reads more like a lesson than a short story, a lesson about personal fears, the impact of power, the negative influences of keeping secrets and, most of all, the struggle between the forces of good and the forces of evil. Power has a way of taking you by surprise, of making you do things that you thought you will never do or that you thought are not in your nature. Graham Downs explores this aspect in his story by presenting us with Queen Celeste's tale of how she overcomes her fears and how she learns to trust her instincts.

I must say I truly enjoyed the book, and I found it to be very entertaining for any readers, no matter their genre preferences. It teaches you lesson while it entertains your appetite for reading, and this cannot be said of many short stories. As a bonus, it has a fantastic cover and is written in a fun and engaging style. I am looking forward to reading more from this author.