Where Are My COLORS? A Fish Ate My Homework

by Rick Robinson and Wade DeHate A View From the Middle 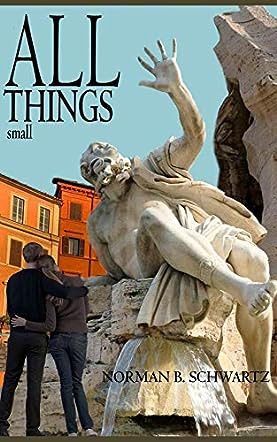 In All Things Small by Norman B. Schwartz, we first meet protagonist Nathan Epstein in 1961, with a guidebook of Rome in his hand as he settles at a cheap table in a cheap restaurant in the Eternal City. Trying to read the menu after only a half-semester of Italian, he is soon joined by a local conniver, poet, and avowed communist, Sergio. Sergio becomes a guide for the young man wanting to live in Rome for five dollars a day, and author Schwartz’s novel takes flight into Rome’s back streets, darkened dives, and ice cream shops covering secret tunnels in search of the city’s ancient riches, and eventually into the cutting room of Italy’s official cinema production facility. Here, under the tutelage of an exiled Hollywood mobster, Nathan finds his calling as a film editor, the “small step” of a fascinating, comedic life journey.

I laughed and shook my head as I read All Things Small by Norman B. Schwartz. It’s a riotous story of poor, blundering, developing Nathan Epstein, tunnel digger, cathedral violator, film cutter, gigolo, and young man resolved to achieve success in his finally discovered field. Meanwhile, we are treated to insights into the Italian language, courtship, secrets of the artisan rooms of the movie world, Roman myths and ironies, “the Roman love of the unlikely” and “all Roman nostalgia has its price,” to mention just a few. Even at dinner, I couldn’t stop turning the pages as Nathan returns to the States (Hollywood), then back to Rome as a successful Oscar-winning editing pro. Oh, yes, there’s a rollicking romance too and a mind-numbing ending. If you love all things Italian, adventure, romance, mob culture, and movie-making—and who doesn’t?—pick up All Things Small by Norman B. Schwartz, and open to page one, a “small” first step into a fantastic, delightful read that will keep you smiling all the way.

As the author of the novel which Jon Michel Miller reviewed, I can only say HALALLEJUAH! Writing a book that purports to be comic is—as all who have tried to do one know—a grimly serious business. Often the author feels like someone at a party who has told what he or she considers to a hilarious joke only to discover that no one has gotten it. We authors have yet to resort to emoticons. That is not stylistically acceptable. We are dependent on those who still know how to read and laugh. Thank you, Jon. You got it.