Voices of the Grieving Heart 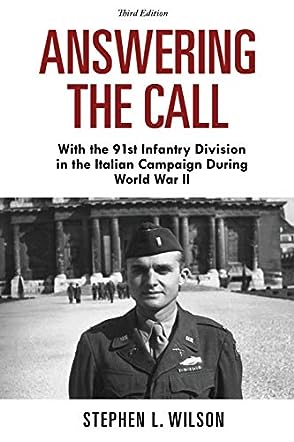 Stephen L. Wilson is an award-winning author and an adjunct professor in the History and Political Science Department at Concordia University-St. Paul. In 2013, he retired from a 35-year law career. During that time, he worked for three different law firms and spent five years with the U.S. Agency for International Development's Office of the General Counsel in Washington, D. C. From 1991 until retirement, he was a partner with Foley & Mansfield in Minneapolis.

He has been married to Kristine since 1977, and they have three children: Matthew, Todd, and Sarah. His interests include traveling, hiking, trout fishing, getting together with family and friends, reading nonfiction, and listening to music and public radio.

Answering the Call: With the 91st Infantry Division in the Italian Campaign During World War II is a military biography written by Stephen L. Wilson. His father, Allen Wilson, was just entering college as a freshman when word came that Hitler had invaded Poland. He had planned to major in Economics, but had switched to Government after attending an introductory course taught by Dr. William Farber, who became both a friend and a mentor. At that time, the University of South Dakota required that all male freshmen participate in two years of basic ROTC training, with an additional two-year Advanced Course being voluntary. Allen participated in both courses and was also active in several honorary military societies. He also became a teaching assistant for Farber and the house manager for his fraternity. When Japan attacked Pearl Harbor, Allen knew he wanted to serve as an officer in the US Army. Advanced Course cadets in their junior year of college were advised to accelerate their coursework in order to allow them to graduate after their fall semester. Allen was one of them. He would serve his country on the field of battle and then as a Reserves officer until 1954, when he left with the rank of Captain.