Treasure of the General Grant 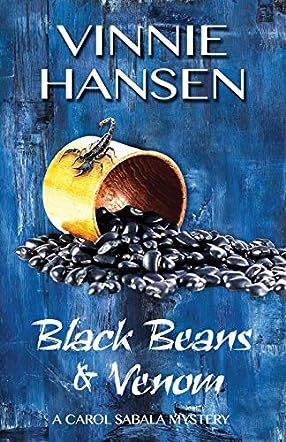 Vinnie Hansen fled the howling winds of South Dakota and headed for the California coast the day after high school graduation.

As a child, she read while huddled on top the dryer. She’s now the author of numerous short stories, the Carol Sabala mystery series, and LOSTART STREET, a cross-genre novel of mystery, murder, and moonbeams. She’s a member of Sisters in Crime, Mystery Writers of America, and Santa Cruz Women of Mystery, as well as a two-time Claymore Award Finalist and winner of the Golden Donut from the Writers’ Police Academy.

Still sane(ish) after 27 years of teaching high school English, Vinnie has retired. She plays keyboards with ukulele bands in Santa Cruz, California, where she lives with her husband and the requisite cat.

Carol Sabala, a private investigator, is hired for an unusual assignment. Wealthy Lucille Barnhart’s daughter, Megan Melquist, has left the country for Cuba. Lucille simply wants to know if she is still alive. Megan’s cancer is now metastasized, and she plans to try an alternative treatment, the venom of the blue scorpion. She is also escaping a sociopathic boyfriend. The year is 2001 and traveling to Cuba is a complicated, somewhat risky venture for American citizens. But Sloan’s Investigative Services has unpaid bills, and Carol needs the extra income. In Black Beans & Venom: A Carol Sabala Mystery, written by Vinnie Hansen, an exciting and perilous adventure unfolds. Working in a new culture, with a language she does not speak, staying in a shabby room in a run-down private home, and dealing with an assertive driver adds to the drama of the unusual request.

While the book is easy to read and the storyline flows smoothly, there are many additional interesting aspects. The description of Havana and the surrounding towns is fascinating; it is easy to visualize the city and its people. The main characters in the story are also intriguing. Carol is a dedicated, logical-thinking investigator and deals competently with new information and situations. Megan can be impulsive, as well as deliberate, in her decision-making. As the author reveals more about her family history, Megan’s actions become understandable. The scheming mindset of the sociopathic boyfriend is frightening. Author Vinnie Hansen has crafted an engaging mystery novel in Black Beans & Venom: A Carol Sabala Mystery. It is the seventh in this series, and every reader will want to read the entire set!

Black Beans & Venom by Vinnie Hansen ticks all the boxes: it’s fast-paced with a clever plotline; the characters are engaging; the dialogue smooth and plentiful, and in this story, the descriptions of Old Havana brilliantly capture its essence and color without bogging down the pace of the story. An ideal weekend or vacation read, this is the seventh book in Hansen’s series based on private eye, Carol Sabala. She’s a bit impulsive, but quick-witted and unafraid of a challenge even when her own safety might be threatened, which it is when she accepts a case for a wealthy woman trying to locate her adult daughter, Megan. Megan is suffering from metastasizing cancer but that’s not the only threat to her life: her narcissistic, handsome and manipulative boyfriend also wants to know where Megan is. Both the boyfriend and Carol track Megan to Cuba where she has gone in search for a cure, and the race is on to see who will find her first. What will happen if the boyfriend locates her before Carol can get her safely back to the US? That’s what keeps us eagerly turning pages.

Now, if you’re curious about the unusual title of this book, Black Beans & Venom, you’ll find a recipe for a delicious Cuban black bean dish which Carol enjoys while on the job at the end of the story. As for the venom (namely of the scorpion kind), while it might offer a cancer fix, it better serves the nasty boyfriend’s plans for Megan. How does all that come together and is Carol able to save both herself and Megan from the boyfriend’s evil plans? That’s what you need to find out for yourself. No spoilers here. Apart from enjoying an entertaining read, since I’ve been to Cuba, what I really liked about this book was Hansen’s ability to appeal to all the senses in her descriptions: she so accurately captures the sights, the smells, the sounds, and spirit of the Cuban people after years of living under communist rule. It is nothing like what vacationers see today in those glossy holiday travel brochures. Including such detail makes Black Beans & Venom more than just another good read. Try it. You’ll like it.

Vinnie Hansen has established her niche with the Carol Sabala mysteries. Black Beans & Venom is the seventh in the series and she has just scratched the surface of what this sleuth can do. Carol takes on a case to find an ill woman, only to find she is in Cuba. Megan is a complicated woman. Carol is unsure if she is running from her controlling mother, possessive boyfriend, or to an alternative answer to her cancer. Having to choose between paying bills or traveling illegally to Cuba is obvious to Carol. Her boss and boyfriend do their best to convince her to reconsider. Carol is no quitter and will see this through even though language, clues, and her accommodations leave much to be desired.

The first couple chapters of Black Beans & Venom drew me in completely and I knew this would be an intriguing novel. I love how Vinnie Hansen varies her writing style to suit the characters. Carol is bold and fearless; Eric is a troubled individual and uses his good looks to get whatever he desires; Megan is shy but finds inner strength through her trials. With precise accuracy, the author alternates which of the characters is being hunted while they each take a turn at being the predator. Hansen applies the essentials of a high-quality mystery: a fascinating plot, danger in a foreign land, captivating characters, and superb writing skills. I will say the ending was not what I was expecting, but it promises that we will see much more of P.I. Carolina Guadalupe Sabala.

Black Beans and Venom: A Carol Sabala Mystery by Vinnie Hansen takes us to the exotic island of Cuba, out of bounds for U.S. tourists, but private detective Carol Sabala wasn’t about to let something as minor as a technical illegality get in the way of a lucrative case, which she was well aware her agency badly needed. Wealthy socialite Lucille has retained Carol’s agency to find her estranged daughter, Megan, dying of cancer and ravaged by chemotherapy and radiation, who had apparently turned to exotic and unknown possible treatments. These are only obtainable in Cuba and involve the use of scorpion venom, endemic to the native Cuban scorpion. Megan’s worries, however, are not just her metastasizing cancer; she is also on the run from her psychopathic ex-boyfriend who she is both terrified of and still deeply attracted to. When Carol arrives in Cuba, she is shocked by the backwardness of the country and must fight both her lack of language and the locals' indifference to her quest. This book is a standalone read, despite it clearly being part of a series relating to the main character, Carol Sabala.

I found Black Beans and Venom to be a fairly straightforward sleuthing novel, with the exotic location of Cuba lifting it above the genre. The main characteristic that makes it stand out from its competition is the feisty lead character in Carol Sabala. The idea of a female private detective, in what is essentially a man’s world, is not a new one for novelists but, for me, it did lend the narrative a distinctive freshness. Author Vinnie Hansen weaves the legend of Ernest Hemingway and his life in Cuba into the story well, which was a plus. A few neat little twists and turns in the story add well to the overall plot of the novel. The sheer evilness and psychopathy of Megan’s ex-boyfriend Eric was a highlight. He was the star, for me, of the story and that possibly wasn’t the author’s original intention. That being said, this is a very readable and relatively gentle sleuthing mystery that fans of the genre will enjoy.

Black Beans & Venom by Vinnie Hansen is book 7 in the Carol Sabala Mystery Series. A case has walked through the door – literally. An investigation in Cuba to find a missing woman but nobody wants Carol to take it. It’s illegal; Cuba is off-limits to Americans, and her boyfriend is concerned about her safety. Her boss is not too keen either but they desperately need the money and, to be honest, Carol is a bit fed up with being left to do the boring office tasks. Heading to Old Havana, Carol starts the search for Megan, the missing woman. Megan has metastasizing cancer and is on the run from a boyfriend, a real sociopath. Can Carol find Megan before she dies, either at the hands of her ex-boyfriend or the disease? And how much trouble can Carol get into?

Black Beans & Venom by Vinnie Hansen was a quick read but an intriguing story all the same. This is the last in a series and I didn’t read the rest but this one seemed to work very well as a standalone novel. It isn’t just a mystery tale, it’s a travel story full of interesting information about Cuba and it is a multi-layered story. The characters are entirely believable, very real people that you can relate to. The plot is complicated, with lots of twists and turns that keep you guessing and there are many different issues – sociopaths, cancer, alternative medicines, dysfunctionality, and so much more - and the book deals with them all very well within the confines of the story. There is an element of suspense, of danger and even humor. It moves fast and it will keep you reading to the last page. I would recommend the series be read as a whole rather than as standalone stories though.