The Truth About Elves The Button and the Bean Custodian of the Spirits 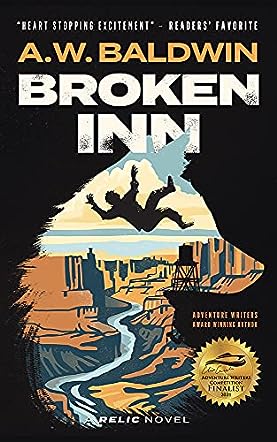 In Broken Inn by A.W. Baldwin, Hailey, a fledgling journalist with the Red Rock Sentinel, has just arrived in town from Seattle when she is witness to an execution-style murder at the remote Broken Inn. Even though she reports the crime to the local sheriff, the suspect remains a free man. When she discovers the potential murderer also has strong ties to her editor, she must investigate the crime secretly. Hailey persuades Ash, the newspaper's photographer, to help her gather evidence and bring this seemingly influential criminal to justice. The duo is caught in the basement of the Broken Inn and manages to escape into the safety of Bitterbrush canyon. They meet Relic, a local recluse and vagabond, and with his knowledge of the canyons, they are able to evade capture as they search for the truth. Together they uncover illegal organized crime and secret barrels concealed deep inside a uranium mine. Hailey, Ash, Relic, and their adopted stray dog must avoid capture, solve a murder, and possibly stop a potentially fatal environmental catastrophe. As they reach out to the one person they think can help, they discover that not everyone has been completely truthful about their identity.

Broken Inn by A.W. Baldwin is a compelling action-packed story from the outset. The characters are strong and created with a great deal of care and consideration. I absolutely adored Relic; his positivity and down-to-earth view of situations and the world, in general, was admirable. He not only had a kind and caring personality, but he was also extremely funny at times. This was one of my favorite Relic statements: "One guy can be pretty stupid all by himself, but nothing beats teamwork for some genuine, certified stupidity." The relationship dynamics between Hailey, Ash, and Relic were amazing, they worked so well as a team. The twists and turns of the plot were brilliantly executed. I loved the obstacles the trio and the wonderful dog, Chance, had to overcome as they were relentlessly pursued by the criminals. The action and adventure were absolutely gripping and, at times, there was heartstopping excitement. The ending was quite emotional as Hailey evaluates what is important to her, comes to terms with losing her mother, and realizes what path she wants her life to take.

Hailey isn’t expecting much when she takes an “externship” at a newspaper in a small desert town in Utah. It’s a far cry from Seattle, where she’d been attending college, and she can’t see how it will help her future career. But when she witnesses a murder at an old inn while out mountain biking, everything changes. Hailey debates going to the police, but she has no evidence. Her editor, ignorant of what she saw, sends her to the inn to interview someone about its reconstruction. But when Hailey is caught snooping around, she is forced to flee into the canyons, where she is aided by a mysterious recluse who calls himself Relic. After returning to town and notifying the police, Hailey decides to keep investigating with the help of a fellow reporter, Ash. They uncover a sinister scheme involving the Mob and must escape into the desert with Relic in an attempt to thwart the machinations of greedy men, and save their own lives.

Broken Inn, the fifth in the Relic series by A.W. Baldwin, is a fast-paced, adventure-filled tale with non-stop action and suspense. The story is set in the wildly beautiful desert of southern Utah, which is brought to life by Baldwin’s vivid and evocative descriptions. I loved the beautiful descriptions of Utah. They really brought back memories for me. Despite being an action-driven story, there is plenty of great character development, especially for Hailey. Relic, the mysterious hermit, continues to be a fascinating personage, a strange mix of wisdom and quirkiness. Adventure lovers and fans of Baldwin’s other novels won’t want to miss Broken Inn.

Broken Inn by A.W. Baldwin is a crime thriller that is deftly plotted and cleverly written. Hailey is an up-and-coming reporter who witnesses a murder at the mysterious Broken Inn — and Burke has warned her not to go to the old part of the inn, a fair warning. She is disturbed by the connection between her editor and the manager of the inn. When a guard finds her snooping, she knows she must find ways to keep safe. Helped by an eccentric character, a gin-brewing man known as Relic, she reports the crime to a deputy, but nothing happens. She asks for help from a newspaper photographer called Ash, but she and everyone helping her quickly discover that their lives are in danger. Can Hailey unravel the mystery that is Broken Inn and the metal drums they find in an abandoned uranium mine while fighting to stay safe?

This story is well-narrated, with compelling characters and plot twists that keep the reader turning the pages. The characters are not anything like they seem, even the enigmatic recluse, Relic, a character that I adored. He is described as an unlikely descendant of disparate clansmen — one Scottish, one Hopi. He wanders the plateaus and canyons, a moonshiner, and a trespasser at times. He is one of the best characters in the story, and like other characters, he is richly developed. The author does a brilliant job in developing the crime in the novel. A rookie reporter is pitted against a syndicate and it will be interesting as her amateur way of approaching life quickly gives way to maturity as she struggles to stay safe while looking for answers. A.W. Baldwin’s prose is gorgeous, the characters real, and the setting is vividly written. Broken Inn is a fast-paced, emotionally rich, and entertaining treat that you finish in one sitting — it just compels you.