Crimes of a Missed Demeanor Of Wisdom and Valor: The Art of War. The Path of Peace. Abridged Edition by Matt and Melanie Dragovits 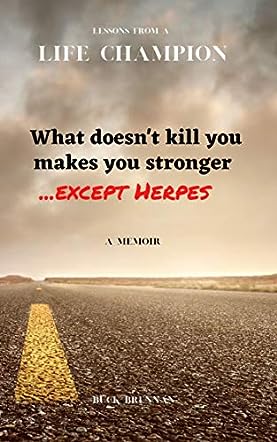 As I read Buck Brennan’s Life Champion, the name of a hilarious British sitcom kept springing to mind: “Some mothers do have ‘em!” Yes, some moms do have children like Buck, boys who grow up believing they will never amount to anything thanks to what some adults...parents, teachers...and even their peers have told them. Little wonder that Buck laments, about 3/4 of the way through his often outrageous, rib-tickling memoir that “It just seemed like everyone was good at something, and I was good at nothing.” It’s like Buck’s been living up to everybody’s expectations all his life, but not because he doesn’t want to be better than everybody predicts. He does. But he doesn’t seem able to find that one thing that he is really good at to prove to himself, and everybody else, that they are wrong.

Well, that one thing he does really well is to write, and after a lifetime of bad decisions, job after job, excessive indulgence in drugs and booze, a massive accumulation of student debt and an unwanted divorce, none of which is his fault of course...ha ha...Buck has lots to share with readers. But those readers need to prepare for a bucket-load of barely credible, sometimes shocking experiences delivered with an earful of expletives, a bottomless pit of clever analogies, lots of self-deprecation, a good measure of sarcasm and lots of tongue-in-cheek humor. Buck Brennan has elected to laugh at his messed-up, messy life, and we laugh along with him. But astute readers will recognize that behind all the humor lies lots of pain. Though circumstances differ, many of us will see ourselves in Buck. He connects with us, draws us in, and leaves us thinking about the many issues, political, social and cultural, that he addresses ever so subtly, and sometimes like a brick over the head! Are you ready for an outrageous, often irreverent read? I dare you to tackle Life Champion. Brace yourself!