by Elizabeth A. Tower, author and John H. Clark, editor Bruiser's G' day At The Beach 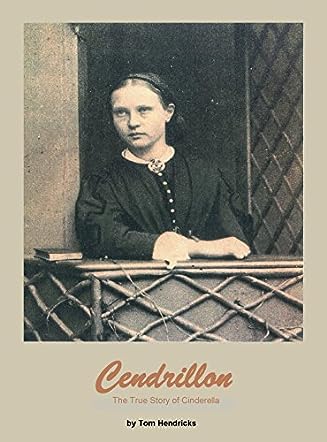 Once upon a time
In a Prairie Town
On the edge of a pine forest
In the hot summer of 1992...

I, Tom Hendricks,
A Musician, Painter and Writer,
Was slipping into nowhere
At a steady pace - then...
An idea...a fantabulous idea-
Musea was born...

Readers, welcome! I encourage you to explore not only my books and blog, but the Musea zine website (for decades of back issues); and the hunkasaurus music site, or read my wikipedia entry.

Cendrillon: The True Story of Cinderella is a novella for children and preteens written by Tom Hendricks. The narrator of the story, who remains anonymous, had an ornate chest that just happened to have an undiscovered secret drawer. One day, his housekeeper tripped over some shoes in the attic, and her fall caused the drawer to open. In it were a packet of old letters tied with a ribbon. He brought the packet to the curator he bought the chest from, who opened it and found letters written in German, and bearing the royal seal and a black and white etching of a young girl. When the letters were translated, they were found to be from Queen Cendrillon to her son, Prince William. They bore a startling resemblance to the fairy tale about Cinderella.

Tom Hendricks' preteen and children's novella, Cendrillon: The True Story of Cinderella, is a marvelous retelling of the classic fairy tale. It's simply and elegantly related by the anonymous narrator, and I found myself enchanted by his story. It doesn't matter that we've all read or heard the story of Cinderella many times before. This version, which includes a carefully restored photograph of the heroine of the tale, makes the story an adventure and a delight all over again. The wicked stepmother, Rachael, and her daughters are suitably awful, and the circumstances surrounding their meeting with the prince are priceless and comedic. And Cendrillon? She's everything a fairy tale lover could ask for. While this novella is geared for a preteen and child audience, anyone who still remembers the thrills and chills of the fairy tales of their childhood will love it as well. Cendrillon: The True Story of Cinderella is most highly recommended.

Beginning with the discovery of old letters in a secret compartment in an ornate chest, Cendrillon: The True Story of Cinderella by Tom Hendricks relates a new version of the beloved fairy tale. Written by Queen Cendrillon to her son, Prince William, the letters describe the life Cendrillon knew as the daughter of a hard working woodcutter who remarried after the death of his wife. The stepmother, Rachel, and her two spoiled daughters, Phillis and Marsha, resented Cendrillon and reduced her to the position of servant after the death of her father. Unable to attend the ball because of the demands of the others, Cendrillon wished she could have gone and up popped a fairy godmother! Of course, the Prince was not at all interested in any of the young ladies until Cendrillon arrived and, as they say, the rest was history. A lost slipper, a country-wide search, and a happy ending lead to the arrival of a new, young Prince.

Tom Hendricks uses a unique historical perspective to bring new life to the tale of Cinderella. Cendrillon: The True Story of Cinderella engages the reader with just enough differences to the traditional version to make it quite enjoyable. Alternative explanations for events add to the interest, and taking the story past the wedding contributes even more to the historical flavor. Hidden within the story are lessons about love, loss and acceptable behavior, not to mention the definition of true beauty. Intended for children but refreshing for older readers as well, Cendrillon: The True Story of Cinderella is a delightful version of a favorite fairy tale.